How global warming changes the future's past in the Furaha Universe 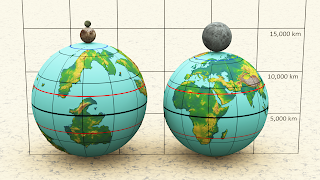 'The Book' starts with some explanations about the planet Furaha, how humanity got there, why anyone would choose to go there, as well as some other background material. The image above gives the reader an idea how large the planet and its two small moons are in comparison to Earth and its large moon. A variety of techniques were used to make it. First of all, for something like this a 'digital elevation map' (DEM) is needed, showing elevation on a grid of longitude by latitude. Such maps are easy to find, for Earth that is, and Matlab's mapping toolbox offers many ways to play with maps. Obviously, I had to make my own DEM for Furaha. The intermediate stage is to make a nice digital map in which colours represent elevation. Second, take a suitable 3D-program and set up a scene with spheres in it. I still use my 2014 copy of Vue Infinite to do so. Then you just wrap the maps around the spheres, set up some light, and you get a nice picture comparing two globes, one representing Furaha, one Earth. However, I increasingly felt that the image I used for Earth might not be appropriate for the future. Mind you, I have never settled on a period in which the future history of Furaha is to take place. Is it the 24th century, like Star Trek? Sometime earlier or later? I do not know and do not care too much. However, the Institute of Furaha Biology is at least some 200 years old, so at least two centuries are needed for that. Moreover, a 'Faster-Than-Light' drive, or an 'Around-Light' drive for that matter, does not seem around the corner, so perhaps we need to give that some time as well. Overall, we are probably looking at at least four centuries. Would the overall contours of the continents look different? The recent report on global warming makes me wonder how much sea level might rise. Humanity is causing global warming, and it is too late to prevent all of it, but part of it can be prevented. If people act in time and wisely, that is. Will they, or will it be a case of too little, too late? The Book is a science fiction project, so the choices are fictional. In the Furaha setting, in that far future, wrong choices were made. All of the Greenland ice melted, and all Antarctic ice, and so the sea rose. By 70 meters. I found that number on the internet as a rough estimate of what would happen if all the ice melted. Wikipedia tells me that Greenland is good for a 7.4 meter 'sea-level equivalent', and Antarctica supplies 58.3 meters, so together they account for 65.7 meters. That is still a sizeable amount. 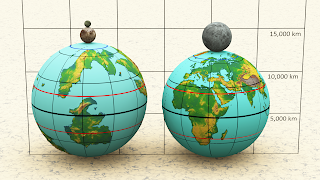 I took the elevation data and adapted them to reflect a 70 m rise. I then had to edit some areas manually, because the program found some inland areas that it now regarded as 'sea', even though those areas had no access to the oceans. Large parts of the UK are gone, as well as the Netherlands, Denmark, Bangladesh, etc. No current coastal city would escape unharmed. I have no idea how such a change would affect the climate, pollution of the seas and myriads of other matters. In the Furaha universe civilisation endured, because otherwise I would have nothing to write about. But I think these fictional future people would look back to their past, our future, with perhaps some new hard-won wisdom. The citizens of the Furahan Institute of Biology passed a unanimous vote to change the formal scientific name of mankind. They abandoned the old familiar name 'Homo sapiens', meaning 'wise man', and changed it to 'Homo semisapiens': man who is half wise. They felt that wisdom must have two parts: the first consists of the ability to think, and the second requires that those thoughts are acted on. According to the Institute, humanity passed the first criterion, but failed the second.
Posted by Sigmund Nastrazzurro at 10:05

You keep going the extra mile in this project, and its inspiring. Kudos to you!

Maybe pump some of the risen sea to de-salting plants to turn arid lands green?

Either way, so thats at least 200 years wherein you don't *need* to show if Earth kept getting worse, or people started getting things to recover. (or 200+travel time) Would that simplify/ease things, artistically?

huh, so furaha is mostly water then

if a planet was like, 99% covered in sea with a single mini-continent about tasmania size, would large terrestrial life even bother evolving to exploit this one teensy niche? would there be any benefit to making the whole aquatic to amphibious to terrestrial transition at all if all they had was one small island?

Beaver dong: you make it sound as if evolution consciously weighs future benefits against costs before 'starting an adventure', but that is not how it works. If a local species of shallow water residents finds it useful to get a mouthful of food just above the shoreline, that would be enough. On Earth, many species adapted to caves, even though their long-time evolutionary prospects are poor. There's no plan, it just happens.

have you reviewed Netflix's Alien Worlds yet? It's brought about a surge of interest recently on speculative evolution and I thought you might be interested or have some ideas on it.

Is Furaha's gravity less or greater than Earth's?

Also: there's plenty of depictions of animals on high-gravity worlds being thick and stocky to support their weight, but could they get away with similar builds as large earth animals by simply being smaller? Like on a planet 2x gravity an animal half the size could still support a similar proportion?

As for interactions of size, mass and gravity, please read the posts of June and July 2010 on 'size matters, but so does gravity'.

Wow, that's all pretty deep! Amazing how all those thoughts came from simply looking at a map xD
Might make for a neat bit of background info in the book should the idea be explored further in the future

Also first time seeing Furaha's moons! Though I wonder how those two small moons would effect the tides and orbital stability of Furaha compared to Earth's single large moon.

Anonymous: Actually, a part of this was already in The Book, meaning the 'Homo semisapiens' part. The sea level rise was new.

And the smaller moons may indeed make for less dramatic tides, although the pull of a moon on the tides also depends on the distance. As the force of the pull weakens with the square of the distance, having a moon a bit closer by can compensate for a smaller mass.