There is too much going on at present for me to write any blog entries on arcane biomechanical biomechanics on other planets. For once, I will focus on some personal aspects behind a Furahan animal, an idea suggested by two anniversaries of past events. Twenty years ago I visited sub-Saharan Africa for the first time. I wished to see animals in the wild, reasoning that the slow degradation of the world's biodiversity would render such visits meaningless in time. I wasn't wrong about the degradation, but it is not too late for a visit yet.

I had a great time, camping in the wild, seeing animals as they are supposed to be, and revelling in an over-abundance of beauty. Any readers who have been to Eastern of Southern Africa may recognise African influences in my paintings.

Click to enlarge; copyright Gert van Dijk
Here is a sketch proving the point: a group of predators is enjoying their meal on a steppe or savannah, watching some large herbivores and being watched in turn. The scientist in me insists in adding that this is not a typically African scene: similar scenes have been played out on European, Asian, American and probably Australian steppes and savannahs countless times, with different species in the prey and predator roles for each time and place. But it is only in Africa that such biomes have not been wholly replaced by wheat fields, livestock pastures or the human habitat, explaining the strong association of such scenes with Africa. In my case, the associations have a strong personal flavour as well.

That visit changed my life because I met my wife to be during that trip. We got married a few years later, and visited Africa several times afterwards, something I stopped doing after she died, also quite some time ago. At the time she was as enamoured with the wildlife as I was. I returned home earlier than my travel companions, and immediately sent off countless rolls of film to be developed (it was 20 years ago). I sent a few prints to my fellow travellers, and decided to tweak one I would sent to my later wife in Paris, where she then lived. 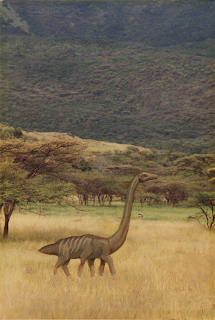 Click to enlarge; copyright Gert van Dijk
I took out my oil paints and altered a photograph of a greater kudu, an antelope, standing on the shores of Lake Bogoria in Kenya. I added a third pair of legs in the front as well as a new neck and head, and masked out bits of leftover kudu. I varnished the photograph so my handiwork was not too apparent. I sent my 'cooked kudu' to her, and she had a good laugh with it. She mixed the photograph with photographs of her own of that trip. A friend of hers went through her stack of vacation photographs, said "Tiens, il y a six pattes" ("Hey, there's six legs") on encountering the photograph and then simply continued flicking through the pictures, without apparently realising that a large six-legged herbivore was more than just a trifle strange, in Africa or anywhere else...

My wife later dubbed the animal a 'bogorbes' (Venia lauta), and it has been part of the Furahan fauna ever since. You will find it on the cover of Sigismunda Felsacker's travelogue "Paleo Days" (see the New Hades book shop), and the blurb text there was written by my wife; not everyone in the Furaha universe is fictional.
Posted by Sigmund Nastrazzurro at 17:22

Email ThisBlogThis!Share to TwitterShare to FacebookShare to Pinterest
Labels: bogorbes

Sorry to hear about your wife; my condolences and sympathies.

It was nice to see the backstory for such an iconic Furahan image. Thank you for sharing it with us.

Have nice days and be well.

(also, I'm glad you proved to be wrong about how long African enviroments would last in the face of man)

Great story, though somewhat sad. My condolences as well.

How closely related is the Bogorbes to the blue herbivore in your banner?

I've always enjoyed the African influence of your work. It's makes the creatures and the backgrounds seem more vital.

I also enjoy learning the backstory of the bogorbes picture. It amuses me how sometimes people can look at an image and not fully process what it is they're looking at. I think that happened the first time I showed my wife's grandfather (an avid lover of biology, with a degree in anthropology) and he just said, "Uh huh, that's nice." Later, when he actually took the time to listen to what I was saying he was quite impressed.