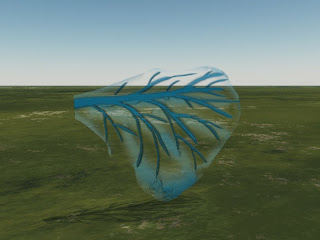 
So now you may understand why it has taken such a long time to put up a 'Flying with...' page, along the 'Walking with..' and 'Swimming with...' pages: the tetropter flight animation has to be ready first, and that is a big job.
Posted by Sigmund Nastrazzurro at 11:20

That is one thing I lament when surfing the web; the relative absence of good worldbuilding projects. I hope Zainter can at least add something to what is already there, but I'm afraid that with my current artistic skills it will probably fall into the category of "well-thought out with artwork that does not do it justice". I know progress on these projects is slow but at least to me that is understandable - we all have real lives to worry about, and coming up with original ideas and fleshing them out is more difficult than it looks (progress on Zainter is proceeding - I have maybe half the text I need, I'm going to have to start work on pictures soon).

To be honest I never wondered about a "Flying With" page, given that only three fliers are illustrated on Furaha's flier page, the zeppeloon's flight method is pretty intuitive and none appear to be radial fliers or tetropters. If one wants "flying with radial fliers", just check out the cliff whistler animation on Nereus!

I don't know about any publishers but the book's layout is worthy of a nature guide to me - I know I would want it even if I had never heard of Furaha. Just keep your fingers crossed! ;)

Regarding speculative biology projects, and the aforementioned "allied matters", have you seen Fentil, by Purple-Plasmid of deviantART? His gallery (specifically, the Fentil folder itself) can be found here; http://purple-plasmid.deviantart.com/gallery/11064997?offset=0
I particularly like his chart of the four "vertebrate" types found on Fentil;
http://purple-plasmid.deviantart.com/art/4-vertebrate-types-180334226?q=gallery%3Apurple-plasmid%2F11064997&qo=9

Also, I hope your encyclopaedia of Furaha will be published soon. I would dearly love to buy that book, along with a book on Nereoid life, were one available.

This is a very exciting post for me. I can't wait to see the animation in its finished form!

I don't think that the supply of good projects will dry up. Their prominence may wax and wane in tandem with their novelty, but a good project withstands the test of time. Even Dixon's earliest work is still credited by many as inspiration for an active interest in the field of speculative biology. Orcs and dragons will abound, but once in a while someone will come up with something that has had a little more scientific thought put into it.

If the rest of your efforts at digital painting turn out as well as "It's a fish" then I have no doubt that publishers will recognize the craftsmanship of your work. Whether or not they publish it will depend on many other factors as well, though, but don't despair! You could always prepare a pdf of the book in its entirety so that, on your deathbed, you can publish that and we can all benefit from your accomplishment! ;)

Ah, the tetropter animation. I never minded this video, personally; while improvements can always be made, I've always appreciated what this animation does illustrate. My own computer animation skills are woefully underdeveloped (and there's proof), so I know just how difficult it can be to emulate the minute and graceful motions of what I believe is the most complex form of locomotion we know about. Keep up the good work!

Zerraspace: perhaps, seeing how much time it takes to produce such a work, we ought to be content that there are any at all.

As for 'flying with...', be patient. Tetropter flight 'existed' before I wrote about it in the third post of this blog in 2008. There aren't any descriptions of tetropters simply because I had not done any good paintings. I hope I manage to get the quality I am aiming for... Here is a sample video showing that extraneous objects can be animated with Vue (Vue + Matlab + Python): http://www.planetfuraha.org/addit/crin.wmv

Anonymous: thank you! Purple Plasmid's work was already on my list of future blog entries, but that list is not ordered in any way.

Evan: I will consider publishing Furaha on my own if I cannot find a publisher, even before I keel over and go under...

Just found something, furahan animals nearer than we think...
http://www.youtube.com/watch?v=6gM7NZfibJA