If this scene looks a bit familiar, that is because I posted previous versions of it as well, in November 2009. This version is updated though, and so is still worth viewing, or so I hope. The end is a bit rough: the 'Fish' is visible for a short while only, which is intentional, and so I thought I could get away with a limited amount of detail. There is a better quality version on the site: simply go to the plant page and select the arrox tree. 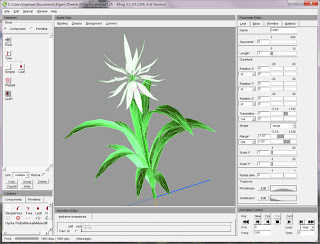 Click to enlarge; copyright plant image Gert van Dijk
Here is a short 'making of'. The plants were all designed with XFrog, a program aimed wholly at structures that branch and grow, i.e., plants. The various rules and settings can be quite complex, but it allows very good control over the characteristics of any plant you create with it. There are not many good plant editors about. One of the few other candidates is the plant editor inside Vue, but that is unfortunately geared towards changing and mutating existing plants, and does not allow the creation of a plant from scratch. Vue has the advantage that it allows its own plants to move in a breeze, which certainly adds to the liveliness of a scene.
The image above shows one of the flowering plants in the swamp scene, as it looks inside XFrog. 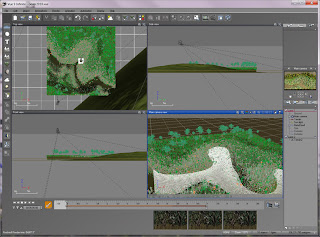 Click to enlarge
The next stage is to produce a suitable environment, for which I use Vue Infinite. Basically you start with a 'terrain', which in this case is the ground with some grooves in it to hold streams. Vue allows the user to define 'ecosystems' as collections of 3D objects that are placed according to rules. For instance, one such system could be limited to high points in the terrain. In this swamp scene the arrox trees only grow on such relatively high ground. The marsh growths, with reeds etc., are limited to medium height zones, while in this case hardly anything grows in the lowest ones. That is on purpose, as they would be obscured by muddy water anyway.
Once the playing filed is ready, the camera is set to fly through the scene, and to produce a ray-traced image 24 times a second, or more. A simple scene lasting 4 seconds may take about 10 hours, so a short film of one minute takes many nights of lonely processing (for the computer, that is; I will be asleep).
And then it is a matter of turning the individual frames into films, for which I use VirtualDub. The resulting clips are much too large to show on the internet so they have to be compressed, at the loss of quality. Adding sound and titles adds to the fun, for which I use Adobe's Premiere (Elements).

And there we are; a Furahan scene that does not actually look that alien. One reason for this is that plants may yield less obvious visual 'alienness' than animals. Regardless , I could not resist putting in an animal at the end. a specimen of a 'Fishes IV' species. I do not yet know how to make the parts of their body move, something that would add greatly to the visual quality of the film. But this is the level of my animation skills at present. I do not think that I will try to become good at it, as there is too little time for that. 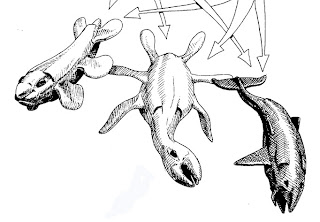 Click to enlarge. From left to right, typical examples of species from the Fishes IV, V and VI groups. Copyright Gert van Dijk

But I guess that some of you will want to know more about the various 'Fishes', that are just called that by Furahan people because the word came easily, not because it is biologically correct. In this sense the early Horizonists seem to have gone for the old custom of labelling just about any type of water animal a 'Fish'. 'Crayfish' and 'starfish' come to mind as well. I will not go into the early development of Fishes I, II and II, that follow one another in geological time. Not so for Fishes IV, V and VI, shown above in a rough sketch. Here is a quote from an authoritative source, Nyoroge's "Broad Stokes":

"From this point on hexapod evolution becomes more complex. ‘Fishes III’ gave rise to three new groups, ‘Fishes IV, V and VI’, all of which had three pairs of fins. This has caused a great deal of confusion. There are two schools of thought trying to explain the ‘Fishes III Division’, as the debate has become known. The ‘Hexaphile School’ holds that Fishes IV, V and VI evolved separately from multifinned ancestors, and have three pairs of limbs in common, because three pairs of limbs are innately superior to any other number, without actually explaining in much detail why this should be the case. The ‘Monophyletic School’ contends that all three groups have three pairs simply because they all stem from a single ancestor. This is somewhat surprising in view of other differences between Fishes IV, V and VI, which do not suggest a common ancestry. The ‘Contingency View’, which has been gaining strength lately, holds that there is no innate advantage in any number of limbs, and that all three groups have the same number of limbs by accident. Molecular Cladisticians keep silent about the matter, due to a lack of clear evidence one way or the other."
Posted by Sigmund Nastrazzurro at 11:46

I've noticed trees with solid, domed canopies in a number of pictures on this site. Are these still part of Furaha, or have they been discarded?

That is an interesting remark, as it reveals a different take on what 'branching' is. I thought of it as any process in which there is a subdivision of elements into smaller parts. So limbs splitting in two, that each split in two, etc., is branching to me, but a big branch giving off small branches before perering out is too. And so is a sudden 'explosion' into smaller branches at one point, which is more or less what a palm tree does.
As for the planar structure, a similar reasoning applies: the basic structure is a plane, regardless of whether you fold that to produce 3D shapes. A head of lettuce forms a 3D object, but the building block is planar.

The domes trees aren't gone. Far from it, but I simply haven't built any of them in XFrog. Your comments made me think I should, and I thought up an interesting take on tree trunks as well. More on that later; much later...

I suppose you're right.

Wow, I'm aching to know more about the dome trees. How do they deal with the problem of wind that you mentioned in the other post? Or is it a secret :) ?

Hello 'Snore Stop'(as names go, that is an original one -does it work?-),

That was my sentiment as well.

Luke: well, the dome trees aren't composed of enormous contiguous membranes. Oddly, I find myself compelled to draw such, but have to restrain myself, as they would not work, or at least not with any moderate amount of wind! I guess this is one of the usual traps for would-be alien life designers; do not make big-leaved plants!