The previous post and the appendix dealt with Dune's sandworms, and how difficult it would be to getting millions of tons of sand out of the way to make such animals move. While the hard-boiled scientist in me rejected them as utterly impossible, the somewhat more romantic SF fan, also inside me, decided not to care one bit.

The size argument probably means that any real sandswimmers, by which I mean those on earth and in serious speculative biology projects, had better be small. Are there any other limitations on what they can do? Can sandswimmers dive as deep as they like?

I searched for an answer by looking at the physics of soils. Not surprisingly, the pressure in sand or another type of soil gets deeper the deeper you get, the same as pressure increases with depth in water. Typical soils contain not just grains of sand, but water as well. That complicates matters because there are separate pressures of the grains and the water between them. Luckily we can forget the water component as we are dealing with pure, dry sand. Comparing the effects of depth in water and sand reveals that sand isn't really a fluid.. They have in common that pressures increases with depth, and more so in sand, as it is heavier. But in water the extreme pressure at the bottom of an ocean trench does not stop fish from moving at all, whereas I imagine that movement is impossible under even two (maybe even one) meters of sand. While this seems intuitive, I found no readily available physical explanation. I suppose it has to do with the internal friction between grains of sand. 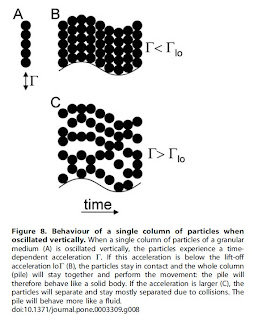 Click to enlarge. From: Baumgartner et al. Investigating the Locomotion of the Sandfish in Desert Sand Using NMR-Imaging. PLoS ONE 3(10): e3309. doi:10.1371/journal.pone.0003309
Loosely packed sand can be shaken, and then it sort of acts like a fluid. The image above is in fact from a study on sandswimming lizards, in which the authors speculated that decompacting sand might make it more fluid.

Click to enlarge. Copyright Gert van Dijk
But simply adding more sand on top would cause the sand to become impacted, and then no amount of shaking is going to create spare room. That is what is shown here. If something (a sandswimmer!) starts pushing a number of grains upwards, an entire column of sand above needs needs to be shifted. In fact, initially that column might look more like a cone, until the grains start shifting. At any rate this is real work.

What all this suggests is that pressure limits swimming in sand to superficial layers. A consequence of that would be that you would see the surface move when the swimmer is passing. It does not seem likely that sandswimmers can swim up to a potential victim without that victim being aware of the sand apparently moving of its own accord. Obviously, if the sandswimmer is a herbivore, any plants it is creeping up on wouldn't notice that. But sandswimming predators that wish to devour surface-walking prey had better do so from an ambush. Having said that, let's have a look at more fictional sandswimmers.

'Tremors' is a film about monsters ('graboids') that beleaguer a small community in a desert environment. The graboids swim under the sand at an amazing speed. As you can see from the video clip, they do break the soil above them, so the filmmakers gain some points for that. The speed at which they move is ludicrous, I am sorry to say. I couldn't see how the animals move: no bristles or legs or anything else I could find. The scene in which the graboid crashes into a concrete wall is wonderful from a story-telling point of view, but less so from a biomechanical point of view. It's not that the animal wouldn't get hurt, hitting concrete at that speed, but that the packed sand it moves through with ease would in reality provide a similarly unyielding obstacle. Anyone who ever took a failed dive and belly-flopped on water knows how hard water can be when struck at some speed. Now take the same dive on sand: there wouldn't even be a dent in it. The same principle is at work with sand sacks: they stop bullets. So I am sorry once again, but graboids are not feasible as shown. As was the case for Dune, I do not think that this harms the enjoyment of the film in any way. Apparently, the needs of fiction outweigh the needs of facts (Mr. Spock might have said that, but I did). Luckily 'Tremors' has a lot of humour in it, so I feel the same about it as I did with Dune.

The scene above is from a British television series called 'Primeval' in which time portals come into life now and again, allowing past and future wildlife to blunder through and run amok in England. In this scene a villain has captured some Silurian scorpions and uses them to terrorise a beach. The scorpions are a lot bigger than they were in reality and are supposed to be excellent sandswimmers, with lots of long limbs sticking sideways. Hmm; that can't really help their sandswimming abilities. When they approach, sometimes you see the sand move, particularly when the scene require drama to be built up, while at other times the scorpions strike without causing as much as a ripple on the sand.

There is a delectable irony in the Primeval scene. A man has been buried in the sand by his children. This is what people do at beaches, and if you search Google or YouTube, you will soon find examples of people being unable to free themselves, especially when the tide comes in: one wave of water can undo a minute or two of frantic digging by bystanders. In the Primeval scene, the buried man cannot free himself, and through this nicely illustrates that humans are very poor at sandswimming. And then the scorpion swims in, from deep beneath the ripples, and sucks the poor man under. Unfortunately, there is nothing about a man-sized scorpion that would make it a better sandswimmer than its victim. I guess the reasoning was once again that "The needs of fiction outweigh the needs of facts".
Posted by Sigmund Nastrazzurro at 13:37

the graboids do have spikes on their bodys.

Anonymous said it before I could.

What might also help, is that the 3 lower jaws of the Graboids have space between them...possibly to allow sand to flow past?

As for Primeval, its been a while, but they may have thought "well, its got a narrow body, and anything that swims will tuck its legs against its body". though that may be assuming they thought it through.

"While the hard-boiled scientist in me rejected them as utterly impossible, the somewhat more romantic SF fan, also inside me, decided not to care one bit."

That's the perfect approach to such dilemmas. If you can't find some level at which you can just enjoy something then you're better off not wasting time with it.

You touched on the idea of water and sand being mixed together. I wonder if some sort creature could develop to live in quicksand. That probably steps outside of "sandswimming" into more traditional swimming in really silty waters, but it's a possible medium that I don't think has really been explored in speculative evolution circles.

I wonder if some sort creature could develop to live in quicksand. That probably steps outside of "sandswimming" into more traditional swimming in really silty waters, but it's a possible medium that I don't think has really been explored in speculative evolution circles.

Anonymous(1) & Rodlox: indeed the graboids have spikes. I watched it anew yesterday and found that the spikes are mentioned as the propulsion mechanism; I had forgotten that. I suppose each is stuck into the sand, pushed backwards, retracted and moved forwards again. As there are so few the forces acting on them must be incredibly large.

Rodlox: perhaps the scorpions in Primeval do 'swim' with their limbs out of the way. You cannot really see them emerge from the sand well enough to judge.

Evan & anonymous(2): that is an interesting idea. The first prerequisite would be a steady supply of quicksand, i.e., places where up-welling water decreases friction between grains of sand (which is the essence of quicksand). Once you have that, it would be interesting to have animals that work their way through it. Moving through quicksand is very expensive in terms of energy. The two next things to solve would be reducing movement costs, perhaps by vibrating their body to render their immediate surroundings fluid. Secondly, there must be a high gain to be had; do enough animals get trapped to make it worthwhile? Evan: is there quicksand in sog?

Is there quicksand in sog? Hmm, never really thought of that. My initial thoughts is that it would be an likely place for patches of quicksand to pop up, especially in the swampier areas. Maybe I can make a nereid that takes advantage of such traps...

I thought you might be interested. Mind you, there should be water flowing upwards through the sand:

Are there subterranean water ducts in sog, and could they be gnawed open by a would-be sog sandswimmer (a 'harenatranator')?

I've been looking at those sites for ideas, as a matter of fact. :)

As far as quicksand forming in sog basins, it would be a different phenomenon than with tear ponds, which have water spilling out from sog and forming pools of various size and depth. But the sog have to siphon their water from somewhere, so there are likely springs or other underground water sources. Quicksand could occur in these areas, and if I can come up with a creature that benefits from this environment I'm definitely naming it harenatranator nastrazurris (unless the declension is wrong)! :)

Assuming a Latinised form 'Nastrazzurrus', the genitive would be 'nastrazzurri'. Mind you, discussing how to Latinise surnames for non-existant animals might be considered a trifle geeky by some...

as to the graboids - in some screenshots (like when one is flying off a cliff), the entire body appears to be bristling.

...while in other views, most of the body is covered in thick callused dark patches - the same thing, just flush against the body?


as for geekiness...I think that ship has sailed by the time we try working out evolutionary radiations among those nonexistant animals. :)