Pardon? Is walking without legs possible? Well, if you stretch the definition a little...

There are quite a few terrestrial animals on Earth that have no legs; earthworms, legless lizards and particularly snakes come to mind. These are not evolutionary misfits whose leglessness will be their doom any day now. Snakes have been around for some 150 million years, after all. Limblessness in legless lizards seems to have evolved at least 8 times, also suggesting that 'not having a leg to stand on' is not necessarily a bad thing. It is probably a very good thing if your life style requires moving around in confined spaces where legs might hold you back, such as underground, in very dense growth and probably in crevasses between rocks. In fact, you may well wonder whether legless animals might be universal, found on many worlds across the universe.

If so, would all 'serpentiformes' or 'ophimorphs' (take your pick) move in the same way? That is debatable, as there may be one or two possible gaits that do not seem to be in use on Earth. How do animals without legs move on Earth? There are animals whose body length can vary, such as earthworms, but let's only look at those with a fixed body length, such as snakes. You can find more on that using Wikipedia etc., but here is a short summary.

The internet did not let me down in a search for interesting material. In the past I have found that some of my biomechanical ideas to design interesting life forms had also been invented by others designing robots, such as tetropters (radial flyers). In this case it was the other way around, and I came across a mechanical invention that might perhaps be 'biologified'. I found it on the website of the biorobotics laboratory of the Carnegie Mellon School of computer science, where they have lots of interesting material on the design of robotic snakes (there are other robot snake designers, but this site seems to cover all aspects). 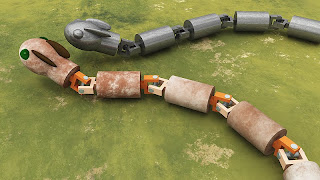 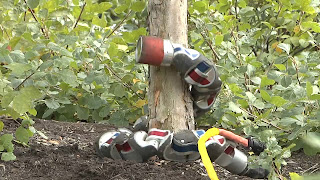 Click to enlarge; source here
The basic element of robotic and live snakes is a segment (vertebrates are just as segmental as arthropods; the segments are just less apparent form the outside). In the picture above each segment is connected to the next with a universal joint, allowing movement up and down and sideways. The robotic snakes seem to have joints with just one axis of rotation (either up-down or sideways), but these alternate on consecutive joints. There is no movement along the longitudinal axis of the segments. Well, in animals there is almost always a bit of leeway, but not a lot; it's certainly not as if a segment could rotate 10 or 20 degrees along a longitudinal axis. It is tempting to adapt the design to allow more longitudinal rotation, and it would increase the 'alienness' of the design. (We need a word to describe how 'alien' an animal is compared to 'life as we know it'; 'alienosity'?)

Anyway, Earth's snakes can move in various ways. There is the 'rectilinear' mode, in which a bit of skin on the belly of the snake is lifted, moved forward, and put back on the ground again. The next bit of skin does the same thing but slightly out of phase, so you end up with a wave of skin rippling backwards along the belly of the beast. As the ripples push against the immobile earth, the snake moves forward. Think about this: part of the body, while lifted from the ground, swings forwards with respect to the centre of gravity of the body, and when it is on the ground it swings backwards: that is a description of what a leg does, if not what a leg is. A fine distinction, but an interesting one: do you define walking by its functional characteristics, or by the body parts that carry out the function? I tend to prefer the first option, but the consequence would be that snakes walk, and that departs too much from common use of 'walking'.

A very interesting snake gait is 'sidewinding'. Here, the snake lifts an entire segment of its body from the ground, moves it forwards, and puts it down again. You get the picture: a walking analogue again. The robotic snake does it too, with waves travelling down the body both in the up and down and sideways directions. In real life it is quite difficult to get a good understanding of how this works using just diagrams, but the videos shown here might help. Sidewinding provides snakes with their fastest way of locomotion: it is the 'running' of the snake world.

Now we get to the creative part: a gait snakes do not use. The robot's body is moved into a curve, so it lies in a plane. Now imagine that you change the direction of curvature a bit, so both ends of the animal would be lifted from the ground. That is not going to happen, as the uplifted ends of the body will fall towards the ground. The result is a C-shaped curve that rolls forward, a bit as how you would move a log by rolling it over the ground. I was struck by the creative beauty of this solution.

But before people trot off to design rolling metaserpents for their own worlds, they should think about why Earth's snakes don't do this. Rolling along the longitudinal axis of the body will cause the animals' head to spin quite literally. The poor animal will have difficulty in keeping its bearings. Regular readers may remember that there was a similar problem with cernuation. I wouldn't say this form of locomotion, which the robot designers called 'rolling', is impossible for animals, but the animal better have very sophisticated vestibular and equilibrium systems. Alternatively, or additioanlly, the head could do its own counter rotation, in the same way cernuating animals could temporarily keep their head still. Spinning ballerinas also rotate their head opposite their body to keep it still in space, and they are not alien (perhaps a tiny bit).

Here is another example of what 'rolling' can do: the designers have actually been able to make their robot climb a tree! Spectacular, isn't it?


And finally, a robot that is not very prominently displayed on their site. They call it the 'skin drive', and about the only information is that it uses its entire skin to move. From looking at the video, it seems to have flexible rubbery skin, and underneath that there must be series of elements that can be stuck out radially and retracted again. I guess that waves of extraction and retraction march backwards across the body, as if you would push successive fingers against a sheet of rubber. If these fingertips find enough traction against the ground, they will stay in place, and the body as a while will be pushed forwards. It is a bit like 'rectilinear' snake movement, but not exactly the same. I wonder where the inventors will take it, or where its evolution will lead to.
Posted by Sigmund Nastrazzurro at 11:41

thank you for sharing these; definately food for thought.

A thought regarding the C-rollers: perhaps either the eyes are bunched together at the center of either end of the body (on the "nose"- and tail-tip of a snake), or are on the sides of the body at various intervals (all shielded from bumping the ground - like snakes or trilobites)

Well I can certainly see how the last snake-bot could be successful evolutionary speaking. Those genes would surely be spread as I could see the ladies being all over that one. ;D

Awesome blog as usual! This really is the go-to-place for anything xenobiological. As someone who has no education in evolution or biology (apart from what you get from regular school here in sweden) but also has an interest in realistic aliens your posts are invaluable lessons for me.

I've always been impressed by how snakes actually climb trees, which is different from how the "snake-bot" accomplishes the same thing. They must have some serious traction on their undersides to do scale trees how they do.

All of you: thank you.

Evan: there are some interesting differences between terrestrial snakes, sea snakes and tree snakes with respect to their circulation (only the tree snakes are really adapted to having part of their body vertical), but while reading up on that I did not encounter any information on traction. I guess that backwards pointing belly scales would help, but do not know whether these differ between the three types. worth checking up on, some day...

(By the way: yesterday I thought of a possible way to have a working clap-and-fling wing design for a triradial flying organism; more later).

Just wanted to let you know that I've done another post on xenobiology over at my blog if you're interested.