Why there is no 'walking with tentacles'...

Tentacles are cool: they look sleek, effective, a bit mysterious, and also slightly repulsive, particularly when covered with lots of suckers and slime. It is no wonder that science fiction illustrators equipped their creations with tentacles when something like the above-mentioned criteria were called for. And longer ago monsters like the 'Kraken', a giant octopus, were the staple monster of heroic tales.

As an aside, it is interesting to speculate why exactly the boneless movements of an octopus evoke fascination as well as revulsion (not in me, but certainly in many people). The explanation might be that their body scheme is so completely different from ours that it is difficult for us to comprehend what is going on when they move. (there are neurons in the motor areas of our brain that respond when we see body parts moving in other people; I would predict that their response is less as a body scheme departs more from ours). But that is not the point here. Let's take it as a given that tentacles create interest, so it would be nice to design some creatures that walk on tentacles.

Those who really know their cephalopods might say that there is no need to design animals walking on tentacles, as they already exist. Indeed; here they are. But those are 'walking' underwater, and I want animals walking on dry land.

Before anyone thinks of the loophole that land animals could quite well walk on tentacles in a very light gravity, I will accede the point. But I want animals walking on dry land in an Earth-like gravity.

Some among you might now think of ballonts (see earlier entries) that are starting to evolve back to a terrestrial life again, so they can walk with their bodies partially suspended from a balloon. To stop that, and lighter than air parts are now declared officially out of the question. The demands put on this design are to walk on tentacles in an Earth-like gravity on dry land, without any unfair ballooning aids.

I will count the solution of having a very very large number of legs as a possibility, but it doesn't sound energetically efficient. So try to design the biomechanics in such a way that the animals could actually work.

Has this been done? Well, yes. In fact, I designed one many years ago (in 1982...), turning one tentacle in a slug-like foot, leaving the others free. It was the Jellyshell, and here is part of its description:

"Without any apparent reason they will suddenly set out towards the beach. Many specimens crawl ashore more or less simultaneously, move around for a while on the beach, leaving trails of glistening slime behind them. These mysterious maneuvers last for several hours; afterwards they return to the water and take up their normal habit of slithering and algal grazing. They will not be seen on land for weeks on end; then you will suddenly encounter dozens of their trails on the beaches, left during one of their forays. Just why they come on land, and why they glide and slither there in their slow and solemn way, no one knows."

But having one slug-like foot doesn't really count as walking, so I guess that one does not count. Dougal Dixon did one several years later: the 'Coconut Grab' (found in 'The New Dinosaurs' from 1988). Here it is (click on it for a full scale depiction; it is fairly large). I think the book is still to be found, and I definitely recommend it. 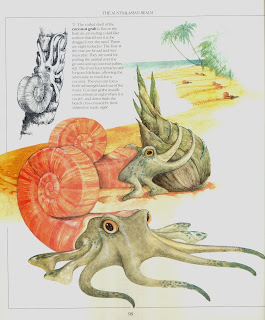 That comes much closer to 'walking on tentacles', but not close enough: as the description says, the grab draws itself along the ground with four of its legs, and crawling doesn't count as walking.

So the only ones I know of that really count are the evolved cephalopods in 'The Future is Wild': the megasquid especially. This was a television series that featured some speculative evolution. The megasquid is a gigantic descendent of squid (probably octopuses, come to think of it), and it walks upright on its eight columnar tentacles. The program does have some comments on how the legs actually work, and these make it clear that the tentacles are properly boneless, as they should be. Here is a frame taken from the program. 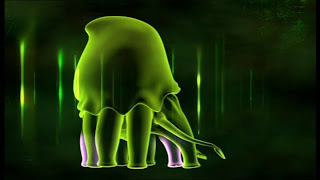 I have my doubts though; is the proposed bimechanical explanation sufficient, or, to be more precise, would evolution leave it at that?

But first some explanations are needed about what makes a tentacle into a tentacle; but that's for another installment.
Posted by Sigmund Nastrazzurro at 23:00 6 comments:

(No, there is no 'Ballonts I', but there is an entry on 'The Interplanetary Zoo III', and that could have been called 'Ballonts I').

I guess that ballonts could do with a bit more attention. Let's start with a small illustration of their physics. I made the point that ballonts work better in heavy gases, meaning that you need a smaller gasbag to lift a given mass in a heavy than in a light atmosphere. Or, you can lift a heavier load with the same volume of gasbag; same principle. So here is a mixomorph larva. Its gasbag, as well as the gas, are supplied by the parent. The larva merely floats suspended from the gasbag. There is complete painting of them, by the way). It floats around passively until it lands, and then the larva can wiggle around for some time to find a suitable spot to root in, and there it remains for the rest of its life. Of course only one of these sketches depicts the real larva: the middle one. The one with the spindly larva shows the consequences of a light atmosphere, and the other one is its hypothetical heavy air cousin.

Playing around with this principle results in a series of organisms from different planets. At the top right you will find a ballont from a light atmosphere. With its large gas bag it is reduced to floating at the mercy of the winds. It does not even have any limbs for transverse movement, as these would be futile. Going down and to the left the gasbag gets progressively smaller. These animals live in heavy, soupy atmospheres. Locomotory limbs, i.e., wings, begin to appear, and these progress from thin weak flaps to sturdier shapes. At the end, just above the gray line, the difference in density between the gas and a fluid isn't very large anymore, so the animal takes on some characteristics of aquatic animals, such as wings that are almost flippers.

The gray line is literally a watershed; below it, we are dealing with fluids, and the shift in density is so large that the gas bag can be extremely small. In fact, it is hidden inside the animal, and is now known as a swim bladder. Gasbag or swim bladder, wings or flippers, they are the same things, really. 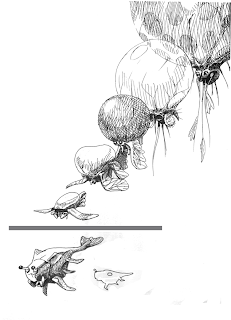 Posted by Sigmund Nastrazzurro at 18:56 5 comments: