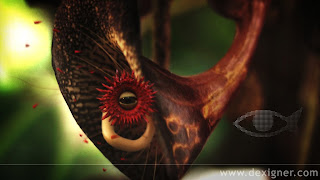 Click to enlarge
I don't write often on alien plants, for a simple reason: there seem to be few of them. I wrote about the -real!- plant life on the island Socotra once, shown you Furahan swamps and showed a few images from the British comic strip Dan Dare. My main post on alien plants was devoted to a computer-generated video. The firm that made it produced another one, as I learned from a site called dexigner.com. The images shown here and the video are taken from that site (the video quality on the site is very good). In fact, there I learned that the previous one was called 'Sixes Last'; there are so many copies of it on the Internet that it is not hard to find it, but it is hard to trace its origin. The 'new' one dates from 2006 and is a commercial for an alcoholic drink. I have nothing against that; in fact, C2H5OH plays quite a role in Furahan biochemistry. As 'advertisement' is not exactly a synonym for 'accuracy', do not expect much in the way of plausibility. Then again, the film does not try to be accurate, just intriguing and humorous. It succeeds well, I think. The computer-generated bits seem to be added to real footage, which may explain why the images look very real. 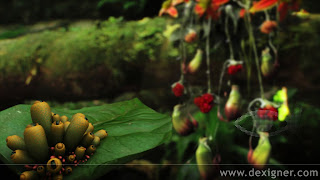 Click to enlarge
The second reason to show it is to discuss the problem of how to design odd plants. I have this worrying idea that the basic plant design may not allow much creative freedom, at least not if the definition of plant is not stretched too much. The main ingredients of the definition may be photosynthesis and being sessile, with some -arbitrary- limits in that the plants in question are multicellular and that they are land plants. Photosynthesis needs light, and the best way to get much light is with a large area, i.e. thin shapes. Needles are good but planes are better. Basically a blanket-like shape with roots to pick up minerals and water is all you need. But if the blanket gets too large it may be torn by the wind, and an easy way to avoid that is to distribute wind stress over many small leaves. Growing towards the light avoids being in the shadow of other plants. Branching systems and leaves seem unavoidable, and any alien plant with those will look like an Earth plant.

What can be done is to alter the relative sizes of plants: thick stems, enormous leaves, etc. and giving them odd colours. But there are usually reasons for these proportions as well as for colours, so there is no total freedom here. The simplest way to add oddity may be to add elements of animals: give the plants eyes or mouths. That is what happened in the earlier video as well as in the present one. Eyes are there to tell an organism about its environment: where is the prey, where is the predator, are there good-looking potential mates around, etc. Acquiring information is only useful if you can act on it, and the main limitation here may be the sessile lifestyle. Sessile life forms can certainly be interesting; there are quite a few sessile predators: think of anemones. But there may be a limit on how well developed their sense organs and brains can become. Why have fine eyes and precise grasping arms when your reach remains frustratingly limited? Wouldn't an animal that can do the same things but that can move around be vastly more fit in the evolutionary sense? You may counter that by saying that it may be enough to outperform the dumb and blind types of sessile organisms. In evolutionary biology traits always seem to cost something. The price to pay may be a metabolic one: eyes, muscles and particularly brains are very expensive in terms of energy.

In that sense, high class eyes are jetset organs, reserved for high flyers only. So the puzzle remains how to increase the oddity of alien plants...


Posted by Sigmund Nastrazzurro at 18:02

Email ThisBlogThis!Share to TwitterShare to FacebookShare to Pinterest
Labels: plants

Designing Alien plants is pretty tricky. I'm generally not satisfied with the plants of speculative biology projects. Too often in an attempt to be alien, they ignore some of the issues that you've mentioned.

One area where there's lots of room for innovation is plant reproduction. There's an incredible variety of flowers and fruit/seeds/nuts etc. Nature has lots of outrageous examples, so it's almost hard to think up something more outrageous.


If you wanted to incorporate some animal traits, i can imagine plant-like life that has mobile offspring, which scurry off, find a good place to grow and then become sessile. As "adults" trees, bushes, whatever, these might retain some animal traits, though i would expect them mostly to atrophy.

I like the idea of plants that support themselves with lighter-than-air gases, ballont plants. Such a plant could take the form of a bunch of photosynthetic gas bags tethered to the ground by a long skinny stem. In tropical climates where the air is moist and still, some ballont plants could dispense with a stem and just float freely in the air, like unsupported epiphytes. Of course, a spherical gas bag is not the deal surface for photosynthesis with its low surface area, but it seems like this disadvantage would be more than compensated for. Ballont plants could reach enormous heights/altitudes using vastly less mass than normal plants. In fact, I'm surprised they never evolved on Earth, especially considering that their water equivalent already exists, kelp. Perhaps no lineage of plants on Earth ever evolved to synthesize an appropriate lifting gas for use in air. kelp after all fill their floats with carbon monoxide gas.

it is funny that you come up with traits that are found on Furaha, but with mixomorphs, not plants. The reason that there are no terrestrial ballonts is either that they cannot work well enough, or that they require too many simultaneous developments such as hydrogen production, and a membrane of a substance like spider's silk.

Here is part of the text for the "bubble tree", unpublished:

"The normal larval birth canals have been shaped into large siphons, which are certainly not a regular mixomorph trait. The siphons are connected to the breeding chambers, and these in turn are connected to gas-secreting glands. The larvae have the normal quadritentaculate mixomorph shape, to which a kind of stalk is added, growing upward from the body, terminating in a broad disc. They also grow a bladder, with a single opening around the larval stalk. The bladder is connected to the stalk by an umbilical cord. When larval development is complete and atmospheric conditions are right, the adult squeezes one larva at a time into the siphon, with a balloon facing to the exit. The tree then starts to secrete gas under the larva. The rising pressure inflates the bladder. The siphon gradually widens, enabling the balloon to be slowly squeezed upwards, trailing the larva behind it. When it reaches the opening of the siphon, the balloon suddenly pops free. The pressure inside the inflated balloon now presses the larval disc down against the opening in the balloon, effectively sealing it. The young bubble tree floats off into the sky, carried aloft by its parent's gas supply.The wind disperses the drifting young, until their balloons slowly lose their buoyancy. After landing, the balloons drop off, and the larvae can crawl about in typical mixomorph fashion. They seek a suitable spot to put down roots and begin the permanently sessile part of their lives."

Fascinating! Are the Mixomorphs photosynthetic?

plants are an ingenious design, it just seems we are so used to them that we dont appreciate their variety (my personal opnion)

I wonder why plant life has evolved without organs such as eyes on Earth? Even if plants evolved simple eyes it would benefit their survival. Maybe it takes to much energy? I don't know.

I recommend watching the Secret Life of Plants. It'll surprise you how much plants move when the footage of their growth is sped up.

You state that plants would benefit having simple eyes. Do they? Remember that survival is simple: you live and spread genes or you do not. It is only useful to have eyes to see something coming to eat you if you can move away from them in time! There is no evolutionary advantage in good vision if you cannot act: you die anyway.

Add a protection mechanism that 1. requires vision to activate it and that 2. prevents being eaten, then you are in business.

I've taken several approaches to increasing the bizarrerie of the plants in my own worldbuilding project. Many of them employ a reproductive strategy similar to that suggested by J. W. Bjerk, with mobile, wandering "seeds" that seek out places to take root based on soil quality, level of sunlight, and water availability, while others are strange in that they employ a growth pattern similar to quite a few plants on Earth (Pando, the clonal colony of quaking aspens, is the most obvious example of this), and spread out not just vertically but laterally. What makes them peculiar is that they spread out aboveground, not below (I have little justification for this other than "it looks cooler," I'm afraid--but then, banyans do something similar, so it's not completely implausible), producing a strange spongy network of stalks and branches capable of reaching great heights due to the combination of both lateral and vertical support.