'Radial robots'; for a title that isn't too bad. I was tempted to add words with 'r' such as 'rampaging' or 'ravaging', but I resisted, as that ran the risk of rather ruining the effect, rendering it ridiculous.

Back to the matter at hand. When I first thought of a radial walking pattern, resulting in Furahan spidrids, I was content to visualise the gait by writing some programmes in Matlab. The results are shown on the Furaha page, and some were featured in the blog as well (here and here). I never imagined I would see really see spidrids walk. Literally, of course, I never will, unless creative bioengineering kits become available quickly, which is unlikely. But walking robots have emerged on the scene since I thought of the spidrids, and among them radial leg designs, as opposed to bilateral symmetry, seem to be quite popular. You can even buy kits to build one yourself. As these designs probably evolved independently, it is interesting to see how parallel these forms of evolution have become: convergent speculation? I therefore surveyed the internet to see whether their anatomy and gaits resembled those of Furahan spidrids. As most of the robots out there seem to be hexapods, I made a quick hexapod version of my originally octapod spidrids (if you need information on spidrids, go to the land section of the Furaha site and select 'walking with...'). A mutation, if you will.

Mutated spidrid; copyright Gert van Dijk
And here it is. I cannot call it a spidrid any longer, as that name evoked spiders, and therefore eight legs. Suggestions are welcome. The beasty walks with the simplest possible gait: that is a double tripod gait, in which the six legs are divided into two groups of three. The three legs of a group move in unison, and the two groups are exactly out of phase. Provided that each leg touches the ground longer than it is off it, there will always be at least three lags on the ground (either that or six). This gait, together with sprawling legs, provides excellent stability. As discussed previously, this is useful for very small animals, soupy atmospheres or a very low walking velocity. It also doesn't require subtle neural control, making it suitable for today's rather dumb robots. It is also a bit boring, which is why my spidrids walk with different gaits, but that is another matter. 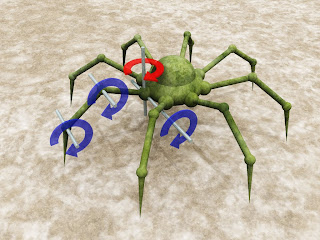 Click to enlarge; copyright Gert van Dijk
Next, a scheme to show how the joint anatomy works. Spidrids are very simple: there is a joint at the 'hip', in which the entire leg can rotate clockwise or anti-clockwise. The rotation axis is vertical, indicated by a shiny metal axis and a red arrow. All other joints are simple hinges allowing the segments of the leg to be stretched or bent, and the axes are horizontal, indicated by more shiny axes and blue arrows. Now that the basic spidrid anatomy and gait are clear, it is time to see whether the robot creators have evolved completely different approaches, or whether they evolved the same ideas.

The first video is of a hexapod robot from this YouTube source. As soon as you see it move you will see that its leg anatomy is exactly that of the spidrid: there is one vertical axis at the hip, and the leg itself only contains horizontal axes. The gait is simple as well, in that the legs move in two sets of three, just like the animation above. I like the clunking sound it makes, as if a whole battalion of Cybermen comes clunking down the street. It does one thing my spidrid animations do not (as yet): it changes gait, in the sense that it moves from a circular rotation to walking again (I could have programmed that, but that is a lot of work...).

Here is another one (source here), and this one has a more biological feel to it, in the sense that the movements seem smoother and less mechanical. It does have the same basic anatomy though. Its gaits seem more diverse.

Just to show that radial robots are not restricted to six legs, here is an eight-legged one (source here), more reminiscent of the original spidrids. With eight legs there are many ways to move the legs, and the risks of falling are diminished, as it is easier to spread weight-bearing evenly around the centre of gravity. 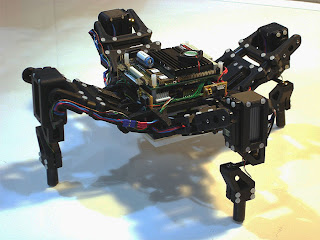 Click to enlarge; source here
Finally, just a look at this one suggest a radical departure from the norm. It has four legs, but that is not the point, as it still clearly has a radial anatomy. The legs do not seem to be attached in the usual fashion: where they touch the body the joint seems to be a simple hinge with a horizontal axis. In fact, all its joints seem to have horizontal axes. So how does it move its legs in more than one direction? How can it walk if all its legs can do is stretch and shorten? The answer lies in its design: this robot is fundamentally different. It is part of a project in which the robot has an internal representation of its body, so it can learn to move once more after its legs have been damaged. In short, it is a lot more intelligent than its dumb brethren. If you want interesting movements, always add a brain (an insect type of brain will do).

And this video shows how it moves: it tilts its body, and that takes the place of (anti)clockwise leg rotations. By varying the tilt of its body the reach of its legs becomes much more varied than with an immobile body. In fact, with the anatomy it has, body tilt is the only way forward (pun intended). What a clever design! I love it.

Does this mean that the 'usual' radial design is flawed? I think not. There are good reasons why this design was invented several times, for robots as well as spidrids: it is simple and allows good mobility. Now, if the robots develop more interesting and sophisticated gaits, we are in business: model spidrids in your own home; what more could you wish for?
Posted by Sigmund Nastrazzurro at 19:52

Wow, pretty cool to see that four-armed bot flailing around like a wounded living creature.

That quadruped example seems the strangest to me. Not only does it require a more dynamic gait by virtue of only having four limbs, but the hinge structure at the "hip" demands dynamic movement. There's an interesting lesson here: the more restrictive the limb/joint configuration is, the more intelligence is required to come up with an effective locomotion.

I was wondering, what is the 'radiation breadth' of furahan spidrids? I've seen only a small handful of examples, and I've never really gotten a sense of their diversity. Is there any more existing material about them than what you've posted on your website?

J.W. and Evan, The starfish robot is intriguing, isn't it? I wonder why they designed it this way. The point was, I think, to show that an internal body representation helps a robot to adapt to failures of its body. Perhaps that point could have been made with more versatile legs as well; I do not know.

As for the spidrids, there are sketches and texts but no full paintings. You can find some examples by searching the blog for 'spidrid', including neospidrids with secondary bilateral symmetry. I envisage them to have a size range from beetle size to the size of a cat, with short legs, long ones, etc.

My favorite has always been the crown of thorns species. It's so evil looking, I might just do a fanart of it some time...

Incidentally, there is a nereid species by the same name, but it's a sessile thermal vent feeder. Ah, the wonders of xenobiological nomenclature!

As I was intrigued by the Starfish robot I asked one =its creators, Josh Bongard, a few questions. here they are, and his reply follows:

Mr Bongard's reply:
"We've found that a large number of degrees of freedom doesn't make too much of a difference when evolving controllers. Also, as the Starfish shows, you also don't need different joint normals per leg. Each of
the starfish's four legs rotate through the vertical plane."

It is interesting that the learning process did not depend too strongly on leg anatomy. Brain over brawn?

That makes sense. As the video shows, the starfish bot does manage to move around in its space. Given time the process could likely develop a more coordinated limb movement.

My pleasure. It does make sense, doesn't it? It is also the only way forward to develop efficient walking machines, it seems to me.