I have used the 3D program Vue to produce some Furahan scenes in the past. I started when it was still called Vue d'Esprit, and now it is simply called 'Vue' (here is the website). Mostly, you will find the results in the plants section on the Furaha site. Vue is an odd program, and if you visit the forums on the website you will find people loving it but also many deploring its sometimes unexpected results, as well as errors.

One of the things that I am a bit disappointed about is Vue's plant editor. There is one, but it is fairly limited: it will let you alter existing designs, but you cannot design completely new shapes with it, and if you want alien forms, you need more freedom that Vue gives you. Of course, there is XFrog: it will allow you to do that, but it is difficult to learn and for several years now all development efforts have been directed at versions to be used with major 3D packages, leaving general users like me with the 3.5 version, that is by now rather old. Still, you can design very interesting shapes with it.

Animation is another subject that Vue must be able to do, as there are breathtaking demonstration videos available, but unfortunately most general users find it extremely difficult to get good results. In experimenting with animation I was not too disappointed, but my standards for animation might not be that high. It is possible that the latest version of Vue is better, but I am at least one version behind.

So here are two scenes from a very quiet swamp. The reasons it is so quiet is twofold: I should add some sounds, but I have never create an alien nature sound track yet. I do have ideas on how to do it, but it does not have a high priority. The other thing you will notice is that the plants and the water do not move at all. Vue can actually produce plants that move in a breeze, but that works only with its own type of plants, not with imported objects.

Copyright Gert van Dijk
You can find the same swamp in the plants section by the way.

You may well find that the scene isn't that alien, and you would be right. I am guessing that branching plant shapes would converge in design across the universe, but I could have thrown in a few mixomorphs or ballooning plants to spice up the scene. Then again, there are items you cannot see that well. The 'spirflower' is a case in point. Flowery things are probably universal, in that it makes sense for sessile life forms to entice mobile ones to help with procreation. A flower is just an advertisement. There is no need for them to look like Earth flowers though: any form might do, I guess. The spirflower has two brightly coloured blade-like leaves in a double spiral, with small bulbs on top that exude the reward for landing there (while secreting some sexual cells, of course). Here is one in a close-up, done with Vue. 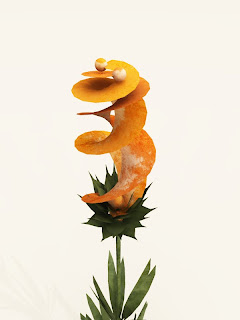 I agree that it seems plausible that "flowers" would vary more than "leaves" in general from our earth-based expectations. But it seems to me that "flowers" have certain structural commonalities beyond being eye-catching. These of-course might not apply to an alien world, but it's probably good to consider them.

* Visually the flowers colors tend to guide the pollinator to the pay-off. Generally in the center, often a small area of contrasting color to the bulk of the petals-- like the middle of a bulls-eye. Sometimes this isn't as obvious to human sight, but shows up fine in UV. The back is often relatively bland.

* Structurally the flower is designed to guide the preferred pollinator to the payload, while often excluding other creatures. Generally a flower is shaped like a funnel to help direct the pollinator right in. Flowers with long-narrow openings allow access to hummingbirds, but keep bees out. Some offer a twisted obstacle course, where the pollinator can't help brushing up against the pollen.


One could probably come up with an explanation for how this spiral plant works, but it doesn't look to me to be especially "user friendly". A lot of surface of about the same color, and nothing obvious to lead the pollinator to the nectar/pollen.

As always, there an infinite amount of potential detail one could consider in any direction in world-building.

insightful remarks as usual. But perhaps you are looking at the 'essence of flower' from an Earth perspective. True, the colours of Earth flowers, ultraviolet or otherwise, attract attention to its centre.

But that it is not the only solution: the pollinator know the 'rules' ('go to the centre') as well as the flower. But here the rule is another one: 'when presented with a splash of bright colours, move UPWARDS'. As long as flowers and pollinators understand one another, the rule itself is not that important.

Whereas the Morae River site involves spec biol but within what I believe are very relatable terms (in other words, if someone found the flora or fauna in an isolated part of New Guinea for instance we wouldn't be overly surprised), Furaha is a little more out of the box. Maybe the colour isn't relevant/ Could be scent related to the spiral? Equally, as noted in J.W.'s script, there could be a colour outside of human range on the spiral.