Every now and again I search the net for anything interesting about speculative biology. Typing in 'alien' is not a good idea, as there appear to be untold numbers of sites concerning little green or gray men with very big eyes who apparently visit Earth to abduct people either to perform unspeakable experiments or, failing that, to make farmers' lives miserably by doodling abstract forms in their grain fields.

Entering something like 'exozoology' or 'exobotany' is better but yields very few hits. So, with some trepidation I typed in 'alien plants', expecting the usual sites of Earth plants that cause trouble on a part of a planet where they do not belong. But this time I was directed to a message of someone wondering about the reality of a video. Some more research revealed it had been made by a company doing among others computer graphics; here is the link of the company, but I could not find the video on the site, so you may be wasting your time there.

The video was still present on YouTube, and I copied it (it is at the bottom of this post) as a mpg file. Here is the YouTube link for those who wish to see it in its YouTube surroundings.

By and large, I like it. The image seems to be a composite or real life footage with CG effects, which works quite well to convince the viewer that the scenery looks real. I looked at it a few times and started to think about what you see, and what all the effects are for.

What you mostly see is that these plants move. Obviously, all plants move, in the sense of growing and being moved by the wind, but these of their own accord on the timescale of animal movements. Some Terran plants do that as well: many seeds are dispersed by the sudden release of stored energy, either elastic or driven by turgor (turgor is the pressure inside plant cells; they push against the cell walls, giving the ensemble stiffness, like a tough balloon or a tire). 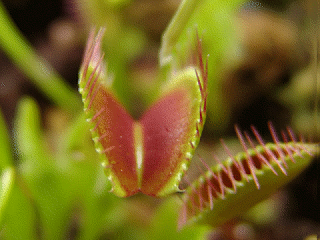 (from Wikipedia)
The above picture shows a Venus flytrap; it moves, and so do quite a few other plants. But the plants on this short segment, without any title, move differently. Their movements can be repeated and some are fairly complex. I wonder what the machinery behind the movement is? Contractile cells, i.e. muscle cells? A special kind of boosted turgor?

Moving plants are not that uncommon in science fiction; just think of John Wyndham's 'The Triffids'. Triffids could not just walk about on stumpy rots, but had nasty tentacle-like thingies to lash out and blind people, and they communicated by making sound. 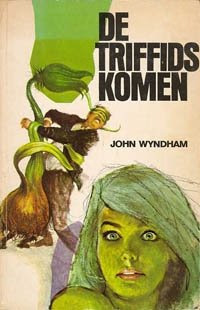 This is the cover of a Dutch translation I read as a child in 1967 (the cover is by Rien Poortvliet! -for those to whom that means something-). Triffids were well thought out, and there seemed to be a sinister reasoning behind their make-up. 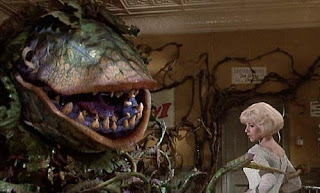 Click to enlarge
The same even holds for the big carnivorous plant in 'The little shop of horrors; after a sessile phase in which it depends on mobile forms to bring it food ('Fee me, Seymour!') it moves about on its own.

In many other cases having the ability to move does not make much sense for a plant. In science fiction, of which speculative biology is a part, there should ideally be a reason for any characteristic; at the least some 'techobabble' is expected. The video shown below does not display any reasons for movement. I would like to know more, but this is just a short clip of life somewhere. If you were to see a clip of some Terran field with flowers, you would not be told why flowers exist, or that they may be seasonal, or how the proceration of plants intermingles with the life of insects. So I am inclined to just enjoy it, and perhaps to start thinking about the reason for some of the movements.

But there is one thing I am uncomfortable with: many of the plants seem to have eyes. That raises the question why they would have any. Eyes are apparently not difficult to evolve, and there are an amazing number of ways to design eyes (an excellent book is: Animal Eyes by MF Land & D-E Nilsson). There are eyes that merely tell their owner from which direction light is coming, while other eyes have exquisite resolution and/or sensitivity, like ours or an octopus'. But you do not find such pinnacles of high-tech eye design on a mollusk spending its life stuck to a rock. They would need a big brain to do something with the visual information, and even if they had that, what would a clam do with the knowledge that a dangerous predator is coming its way? Run away? In fact, good vision does not stand on its own. It only pays to have high-quality vision if the resulting information can be processed and put to good use. All these things must evolve hand in hand, so to speak.

So I prefer to think that the eye-like organs in the video are not eyes at all. What we see is an organ with a shutter moving quickly across its surface every now and then. That does not mean it must be an eye. Perhap the working of this organ depends on a sensitive membrane that needs to be kept moist and clean. If only I could think of a function that does make sense...

Posted by Sigmund Nastrazzurro at 15:05

Interesting video. The creator(s) do really seem to like the "eyeball" aesthetic. While some really did seem to be plants, others appeared to be animals attached to plants, like mollusks attached to rocks. So it could be that they are animals using camouflage. Or not. :-)

Still, someone had fun making creepy plant-things. Not only do the hills have eyes, but so do the plants! That feeling that someone is watching you? NOT paranoia!

Maybe the "eyes" are there to collect wind blown pollen which might explain their numbers (the better to increase the ratio of pollen collection with) and the need for them to be moist (the better to keep pollen on with). Yes I have just spent a quarter of an hour reading fairy tales to my daughter and I have began to feel very Grimm about the prospect of story time (which I decided to introduce).

When an “eye” catches something pollen sized and shaped (the pollen would be released in biggish clusters to avoid confusion with other particles) it stops blinking and one of the plants tentacles or some other mobile organ would retrieve the pollen and verify its authenticity and species with some kind of sensing device. This means that the “eyes” are basically highly evolved stigmas but with a bigger capacity to collect pollen since they are wiped clean every few seconds. This also means that external pollinators are not needed since the plants operate abioticly.

P.S. If this makes any kind of sense, take heed that I am no botanist, the terms are simply the result of the magic of Wikipedia!

The botanical words, not the idea.

Hi, Nano here. In a planet I'm working on, I thought about having ballont algae (basically, flying ballons that photosynthesise). Said algae were developed from early algae that trapped bubbles in their body to get to the surface, before using hydrogen instead and taking to the skies. Well, such plants would be quite populous in environments with surface soil and rain, so I imagined a big cloud of them making a layer in the sky.

Well, that wouldn't leave much food for ground-based organisms, so I wanted green-absorbing plants. However, I can't find any pigments that use a chemical I know to be common on land. Anyone on here know such a pigment?

As the author of the blog I get notified when a comment appears on any post, but no-one else will, so the chances of people seeing your question following a four-year old post are small.

But before you g on, you should perhaps read this post about small ballonts:
http://planetfuraha.blogspot.nl/2011/07/ballooning-animals-and-newtonian.html
(there is also a ballonts IV posted later)

Thanks for responding so quickly.
I've read most of the posts here, since they're extremely useful for speculative biology. The balloon-layer would be made of spheres, about one and a half metres in diameter for the smaller ones and possibly four for the larger ones. They'd reproduce through sexual budding, with a smaller balloon attached to the larger one, inflating itself until it splits off.
Is there any more recent posts (or, for that matter, places in the blog) where I'd be more likely to get an answer?

Aha! I had assumed that you were talking about a sort of aerial plankton. Sorry. As for getting more replies, the best place might be the speculative evolution forum: they are not limited to Furaha 'and allied matters': http://s1.zetaboards.com/Conceptual_Evolution/index/

It's no problem, the whole 'alga' thing was a bit confusing. I just like plant-based ballonts because of something from an early project, which was an alga.
Yup, I posted a topic on there. However, as it's in the biology subforum and there's not many real biochemists around, there isn't really much anyone can post for it, so it's been covered up by topics on living tools and aquatic ape hyoptheses.
Since I don't really know many other places, and here usually has some interesting conversations in the comments, I decided to see if anyone knew a suitable pigment for land-based purple/other colour plants.

Perhaps you should then try the 'yalk section' of the Furaha site: planetfuraha.org.

Perhaps people will pick it up there.