The Cycle of Cyann IV

About one year ago I first wrote about the Cycle of Cyann (here, here and here). This is a French series of graphic novel about a young woman travelling through worlds and time using an ancient portal system. It is definitely a series for those with patience, as the series started in the magazine "À Suivre" in March 1993, and now there are still only four albums. Unfortunately, there still does not seem to be a version in English.

In the course of the story told in the first two albums a party searching for the cure of a dangerous disease travel to the planet Ilo. After getting down they have to make their way across a continent, encountering a variety of climates and biotopes as they go along. At one point, the party travels through a wintery place. The image is taken from a Dutch version, so now you know that what they are saying is largely not an alien language. The party is travelling in an enormous vehicle, here shown in the background. The characters discuss the 'funny animals' in the foreground, called 'ziglones'. The following images shows how the ziglones huddle together, no doubt to conserve heat. Mind you, the ziglones play no part in the story. They are just there to make the background, the world of Ilo, more interesting. It works for me... 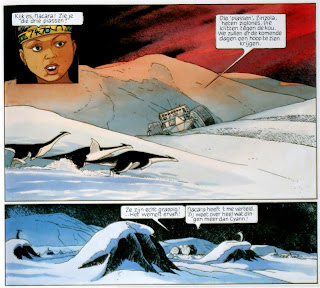 Click to enlarge; copyright Casterman
Shortly afterwards the protagonists spot the vehicle they are following and wish to catch up with make a detour around a small valley. With the commander (Cyann) in bed, the crew charged with steering their enormous vehicle decides to cut some corners and head straight through the valley, dotted with snow-covered domes. The following page shows what happens when the vehicle crashes into the domes. 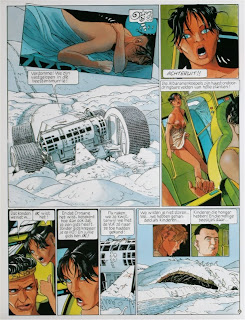 Click to enlarge; copyright Casterman
Some of you may be distracted by the appearance of Cyann on the command post. The home planet of these people is hot and humid, and they dress accordingly. Something that may also play a role is that the French regard such matters in a rather more relaxed manner than people in some other countries do. Vive la différence...

Anyway, those not distracted or post-distraction will notice that the domes are filled with animals, called 'albarans'. The crew protests that they could not know that the domes were hollow and do not allow travel, but Cyann says that she did know. Knowing details about the planet and its dangers is a recurring theme throughout the book, along with how some people have knowledge they were not supposed to have. But back to the domes. The crew still thinks the albarans are kind of cute, but the lesson that is is better to be careful in an ecosystem foreign to you is rammed home by what happens next:

Click to enlarge; copyright Casterman
And that is all we ever get to see of the albarans in the story. A considerable amount of work must have gone into the design of these ecosystems. Luckily, there is an accompanying book that offers a glimpse of all the work the authors (François Bourgeon and Claude Lacroix). That one (La clé des confins) hasn't been published in English either, nor in any language other than French as far as I know. The book contains more information on the universe of Cyann. There is a double page on the albaran dome system. Not wishing to ruin my copy, I left a grey band running through the page. Basically, the dome is the result of a collaboration between a plant and a fungus, creating a home for albarans, 'lagades' (a species of bird, shown on the right), insects and even fish.

Click to enlarge; copyright Casterman
As you can see, the drawing is dotted with little asides describing elements of life in the dome. Still, much is left unsaid, such as how the dome generates enough heat to prevent freezing, or how this complex system evolved. But perhaps that would be asking too much: I can understand that the authors wish to show some details, but not all. Few things get boring quicker than an over-abundance of explanations; always leave enough unsaid to keep the reader hungry for more.
Posted by Sigmund Nastrazzurro at 15:00

Anyone else notice that the ziglones and the albarans look very similar. Both have flipper or wing-like forelimbs, both have long necks with small heads on the end, etc. Convergence? Or maybe the two form a clade to the exclusion of the "fish" and such on the planet.

Nice story, I would of loved to read it. Too bad its in Dutch though.

There are probably some ways in which the "fungus dome" could retain heat. It could have a black roof, which would absorb heat whenever the sun comes out. It could also prevent heat emitted by the animals to keep the environment warm (or control it to keep its inhabitants from being overcooked or underheated). If we really wanted to get weird, one could suggest that it is channeling warm water heated by geothermal vents into its body cavity to make itself hospitable to life.

And now for the obligatory bad pun...

"Its like the fungus dome in here, cept two albarans enterm, and no albaran leaves".

Talking about speculative biology there is also some work in DevianArt by an artist called Ramul that may be of interest as it depicts some nice creatures with supporting biological background.
http://ramul.deviantart.com/