I did mention that I thought some small errors had crept into the way Bourgeon and Lacroix had depicted the shape of the terminator (that's the edge between the lit and dark halves of a planet). How do I know?

Well, the terminator is supposed to be a great circle on a globe; it just looks distorted on a flat map, but is a circle in 3D. But if we take that flat map and drape it around a globe and have a look, the terminator ought to show up as a perfect circle again. I did just that with an image taken from the book 'La clé des confins', and here it is. The flat image is shown alongside the sphere it is draped around.

Click to enlarge
The thin latitude and longitude lines are drawn by the program I used to depict the globes (Matlab); the vaguer lines were in the original image. You can see the two equators line up nicely, so the map isn't too inaccurate. However, the terminator at the pole does not form a smooth circle, but has a distinct 'peak' there. Anyone who has tried to draw flat maps for the purpose of having them look good on a globe knows that polar areas are very difficult to get right. The map by Bourgeon and Lacroix shows some 'pinching' there.

To be fair, I also did the same trick with my own projection. Here we go:

Click to enlarge
It does work better, but I am not making this point to gloat. The opposite, in fact: I am astonished how accurate this was all done by Bourgeon and Lacroix. Remember that the album 'Six saisons sur Ilo' appeared in 1996 or 1997. I first worked out the mathematics of the terminator shape in 1985, and in 1996 this was the best printer output I could obtain: 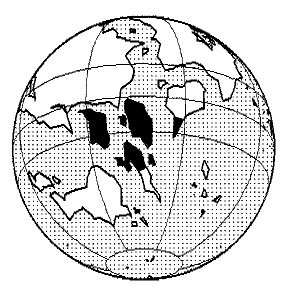 Not exactly impressive, is it? So, no doubt, to produce good drawings, Bourgeon had to redraw the image by hand, and I guess a small error crept in. I am curious to hear whether this explanation is correct, though, so if anyone knows how to reach the authors, please let me know.
I also promised you animations of the ring and its shadows. They're done, and as I cannot post them here, I decided to incorporate them in the Furaha website. Simply go to the site, choose the planet icon and then 'some more examples'. If that sound too complicated, go there directly by clicking here (but you will lose the context).
Posted by Sigmund Nastrazzurro at 21:04

My first guess would be that you used a slightly different projection than the authors. Some map projections make adjustments around the polar region to keep the landmass' areas correct or produce as little visual stretching as possible.