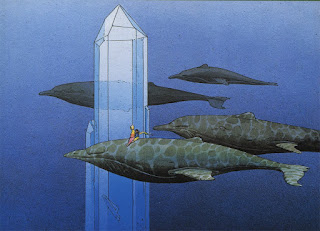 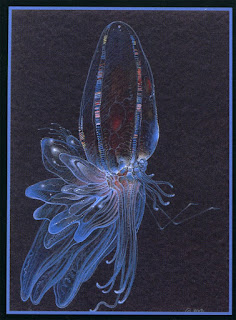 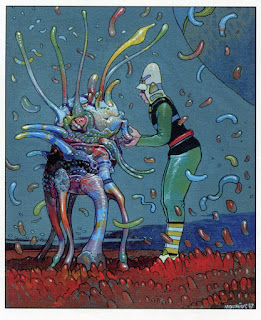 Click to enlarge; copyright Casterman 1995
Jean Giraud (also known as Moebius or Gir) died on March 10 this year. I first encountered his work in the seventies, probably in the magazine 'Métal Hurlant'. I do not think anyone disputes that he was a Grand Master of what the French call the Ninth Art ('Neuvième Art'): 'bandes dessinées', or 'comics'. You might that, regardless of his qualities, his work does not really belong here; while he did draw alien animals and plants, you could see that they were never meant to be realistic. The ones above prove that point, I think, while also underlining the facility with which he drew. To get another view of that, here is a YouTube take of him at work.

Click to enlarge; copyright holder unknown to me
The image above appeared on the cover of Métal Hurlant in 1976. Such images came as a welcome shock at the time. The way had perhaps been prepared by underground comics, but there still was else nothing like it; remember that science fiction films were not mainstream at all, and that computer-generated imagery was in fact science fiction. The cover impressed me so much that it stayed in memory to the present day. Major Gruber, the main character, just exudes character (stiff upper lip anyone?), as does his alien assistant. But look at that 'wall' behind him: it is part of the head of an animal slain by the 'great human hunter' Major Gruber. You cannot see the head well, partly because it is such a large animal, and partly because it is obscured by lettering, which does not hurt the design. This seems to be a magnificent example of telling a better story by not telling all of it.

So when does the major meet rusps? Well, he doesn't really, but just wait. Once rusps had evolved their imaginary existence, their place in the ecosystem required attention, so specialised armoured predators started ramming their way through the rusps' carapaces, keeping their heads tucked away below their bodies to avoid being blinded or decapitated by the rusp's whips. But after imagining this first onslaught, the question came up why rusps would stand still while attacked in this way? Could even a troupe of such predators bring a rusp to its many knees? Perhaps, but the losses to the predators would probably be unacceptable. An obvious solution would be to introduce a mega-predator, so large and strong that it could attack an adult rusp and expect to win. For reasons unclear to me I do not find that concept appealing; for now, adult rusps do not suffer from predation. But rusps die anyway, and a dead rusp constitutes a mountain of succulent meat.

Click to enlarge; copyright Gert van Dijk
Above is my first image of an animal working its way into a rusp carcass, at left. The right panel shows a specialised rusp predator, or perhaps a scavenger. It is not fast but very sturdy, and its two 'raptorial appendages' have developed into two different shapes. The left one is the prototypical blunt instrument, while the right is more useful as a scraper, to reach those parts where other scavengers cannot. 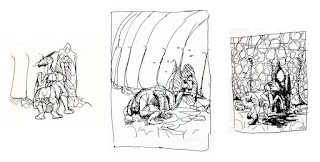 Click to enlarge; copyright Gert van Dijk
My sketchbooks show more versions of this particular scene, in between a variety of other topics. Here are three different versions from different periods. Do you see the influence of Moebius' scene in the back of my mind? The scavenger looks back towards the camera in the same way as the major looks into it. As for the dead rusp, I contemplated showing it as a wall of carapax over a tangle of collapsed legs, directly facing the camera; but would anyone understand what they were looking at? In Moebius' case, the wall was recognisable as a head. The three-quarter views represent moments where I thought I should provide more clues, while the straight-on views were more daring in this respect: the viewer would not know what kind of animal was dead here. 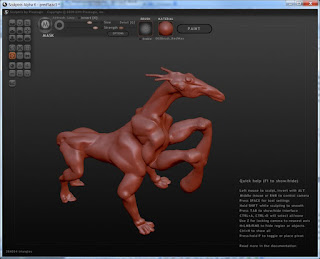 Click to enlarge; copyright Gert van Dijk
I later felt that perhaps the perspective of the predator was too complex. To see if I could improve on the sketches, I recently did a quick rough sculpt of such an animal in Sculptris (above). 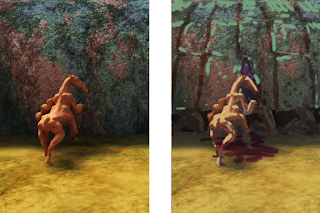 Click to enlarge; copyright Gert van Dijk
I then imported the model into Vue Infinite (left), and exported the image into Painter 12 to paint over. Some very rough brush strokes indicate the structure and legs of the rusp. It is not too bad, but still definitely needs more work; perhaps the design works better on a square canvas. Once I feel that I can do the idea justice I will finally paint that scene, and I will be glad and than to have been inspired, as have many others, by Jean Giraud / Gir / Moebius. 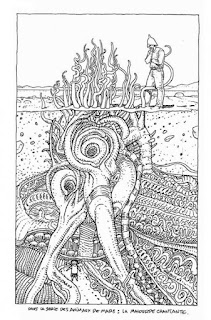 Click to enlarge; from 'Faune de Mars'; copyright Moebius.
This is from a small book only available through Moebius' official site here.
Posted by Sigmund Nastrazzurro at 09:02

Your homage to Giraud's work seems to be coming along nicely. I've considered similar images when depicting scavengers chewing on the bonanza that is a felled magnificent strider on Nereus, and may just produce it now, in order to join in the fun.

I particularly like the "wall" depiction of the rusp. I think, however, that given the inclusion of some of the rusp's legs and the segments of the carapace help the viewer see that this is not simply a wall the scavenger is digging into. Making the rusp's surfaces seem more smooth, fibrous, or chitinous, and less rocky, will probably help with that too.

When you first described the image and how it echoed that magazine cover, I originally imagined the scavenger sitting on its haunches and staring directly at the "camera" with anthropomorphic smugness, possibly licking blood from its lips (if it even has lips...) Not that there is anything wrong with your current composition, it's just that my initial imagining of the description (before I saw it) was rather comical.

Rusps are always good to hear about.

thank you for sharing this with us.

the first two of Gir's art look very plausible (it took me a while to notice where the fins were in the first one, and the second has clear comb jelly influences)

the bottommost one, could be a colony of wormlike animals?