The black, black grass of home...

Black? I hoped that by substituting 'green' with 'black' in the title of this evergreen ('everblack'?), your mind would create an image in which plants are suddenly no longer green but black. Plants hardly ever feature as more than background material in science fiction. SF artists may try to come up with odd plant shapes, but the general colour of your generic SF plant is green. Personally, I also often used green plants in my Furahan paintings without conscious thought. 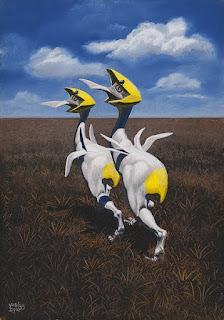 Click to enlarge; copyright Gert van Dijk
What you see here are 'blackgrasses' on Furaha. In effect, they are largely brownish, but in this case at least I did not fall for the 'plants are green' trap. There are exceptions to ubiquitous greenery though, and the best-known one is probably Well's Martian 'red weed'. Anyway, perhaps it is time to think a bit harder about the colour of plants, first on Earth, then elsewhere. This post will be a bit technical; sorry for that. For more thoughts on this issue, see here and here.

The 'green, green grass of Earth' may trigger associations chlorophyll and photosynthesis ('chloro' means 'green' and 'phyll' is derived from 'leaf' in classical Greek, so it means 'green leaf stuff'). Photosynthesis concerns the trick of capturing the energy in light and transferring it to chemical energy (ATP), and chlorophyll is at the centre of that trick: it captures a photon, setting loose an electron that sets a cascade of motions going. As Chlorophyll is green, you might think that a green colour is good for photosynthesis. It is not: green light is almost useless for photosynthesis using chlorophyll. 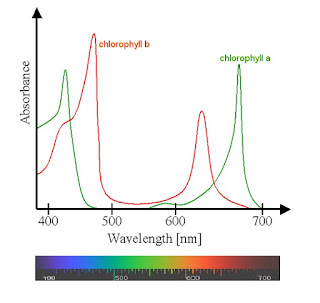 Click to enlarge; from Wikipedia
Remember that what we call white light is a composite of a range of wavelengths in the electromagnetic spectrum, ranging from deep purple through blue, green, yellow and red to deep red. It is no coincidence that we call that portion 'visible light'. When light falls on an object some wavelengths are absorbed, while others are reflected. If an object looks green to us, that means that green light is reflected, meaning it is NOT used by photosynthesis. Above is an image of the absorption spectrum of two chlorophyll variants. A peak at a specific wavelength means that light at that wavelength is absorbed and used by chlorophyll. There are peaks in the red and blue parts of the spectrum, but not in the green portion of the spectrum. Does that matter? The answer depends on whether there is in fact a lot of light in that part of the spectrum, so let's compare the absorption spectrum of chlorophyll with the light output of the sun. 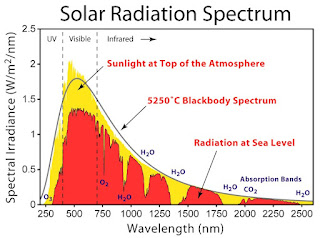 Click to enlarge; from Wikipedia
The atmosphere selectively absorbs some wavelengths, so what is relevant is how much of each wavelength reaches the Earth's surface. That is shown above. Try to find the visible part of the spectrum , from about 350 to 750 nanometer. You will see that there is a lot of light there. 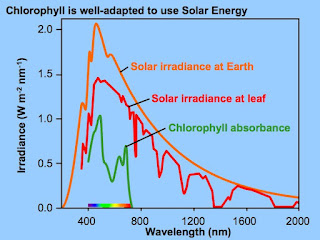 Click to enlarge; from here
Here is a graph combining all the previous information. Note that the title states that chlorphyl is well-adapted to use solar energy. Well, yes, in the sense that it is roughly sensitive to light in the area where there is most energy. However, there is this big conspicuous gap, meaning that lots of light is unused by plants, mostly of the green variety. In fact, Earth plants would get on quite well if the sun did not emit all that energy at green wavelengths. (We would not like that though, as there would be about 40% less light to see with, and our ability to see details would be harmed as that depends to a large extent on green light; but that is another matter).

All this suggests that chlorophyll is not the best of all possible light absorbers on Earth. To make the most of sunlight, you would want a molecule that is responsive to a much broader part of the spectrum. Such a molecule would reflect very little light, so it would be black or at least very dark. You can also argue that, if chlorophyll can get away with using just part of the spectrum, so could another molecule. In fact, chlorophyll is not the only molecule used in photosynthesis. 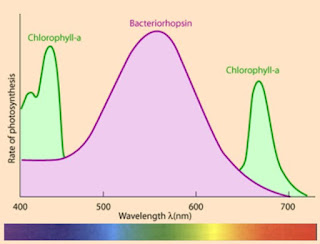 Click to enlarge; taken from this site
'Bacteriorhodopsin' is a well-known example, occurring in some bacteria. Above is a graph in which its spectrum is overlaid on that of chlorophyll. This pigment has a rather broad absorption spectrum, but with a peak at precisely the spot where you would want it, meaning where the sun puts out much light: in the green / yellow parts of the spectrum. As a result, it looks reddish. There is a theory that these bacteria formed mats overlying the very first plants. The only light they let through was at wavelengths the bacteria did not use, so chlorophyll evolved to pick up just those wavelengths. This is a fascinating idea, but one thing that has me worried is the following: if chlorophyll could evolve such a detailed sensitivity to particular wavelengths, why did it stop evolving once plants outgrew those bacteria? Wouldn't it have made sense to retune it afterwards? If it would be sensitive to green light as well we would have black plants, and if it would be mostly responsive to green light plants would be purple.

I have no idea how easily evolution can tinker with light-sensitive molecules to shift their absorption spectrum. Still, light-sensitive pigments occur in vision as well as in photosynthesis, and there is an astonishing variety of pigments for colour vision in the animal kingdom. It seems that such pigments can evolve readily. But chlorophyll seems just to be sitting there, blind to all that glorious green light. Adding insult to injury, the chemical steps following chlorophyll are also singularly inefficient. Part of the problem seems to be that there is very little CO2 in the atmosphere, and that the molecule that takes in CO2 to strip the carbon from it leaving O2, quite readily works in the wrong direction, so the work is partly undone. After all this, the calculated efficiency of chlorophyll photosynthesis is on the order of 4-7%. Seeing how life on Earth depends on photosynthesis, that is a bit worrying.

In summary, the blindness of chlorophyll to green light suggests that other molecules with a different absorption spectrum could be just as efficient (or inefficient). It also suggests that you cannot tell the colour of plants well from the spectrum of the sun in their solar system. If you apply that reasoning on Earth, you will proclaim that Earth's plants are purple... 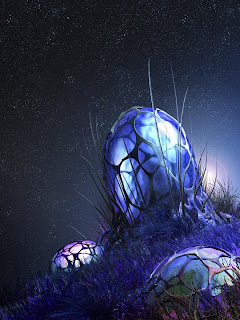 In another post I may go into the consequences of all this for alien plants. For now, just consider some parallel evolution going on, resulting in different groups of 'plants' using different pigments. Forests on such planets need not show shades of green only, but could sport a riot of colours. Ah! The green, blue, yellow, purple grass of home...
Posted by Sigmund Nastrazzurro at 11:23

a very useful and informative entry. thank you for taking the time to write it up. (and with useful graphs too)

I had heard that green wasn't a very useful color, but this contextualizes that factoid, and also explains it.

a few other examples from fiction would be the blue plants of Wunderland (alpha centauri) and the reddish orange plants of Kzinhome, in the books of Larry Niven. in "Spocks World" by Diane Duane for startrek, vulcan was given plants that were a sort of black-green.
and the the Ten worlds setting of Attack Vector Tactical, by Ad Astra games, has a world where Pink and Grey are the best Camouflage, making one wonder just how weird that worlds biology is.

Oh! This is something I was really looking forward to reading! Thank you very much! =)

This is something I've tinkered with a bit in my own worldbuilding; the plants (actually glorified lichens) that are common in the "modern age" of my stories wouldn't look very strange to us, other than perhaps being a bit more cyan in hue than we're used to, but in the distant past of my stories I've envisaged a prolonged period of near-total collapse of the planetary ozone layer due to sustained H2S emissions from the oceans*. During this period, my fungal plants used melanin for their photosynthesis, feeding off of the ionizing radiation pouring through the unshielded atmosphere. The result would be vast forests of "trees" with black or brown foliage and black, silvery, or white bark (to protect against UV damage).

*I've imagined this as having a profound effect on the animals of my world, as almost the only land creatures that survived through this period were amphibious, salt-tolerant creatures who could retreat into the depths of the ocean during the long, radiation-blasted day. 90 million years later, there are still an unusually large number of large amphibious creatures on my planet, and although they're hardly immune to its effects they tend to be more radiation-tolerant than Earth vertebrates, as well.

Another hypothesis I've heard is that plants reflect green light because absorbing it would damage their tissues.

There are other porypherins besides chlorophyll that could serve just as well. I've heard that a molecule based around cobalt rather than magnesium (which chlorophyll uses) could work well, and there's some precedent since the cobalt-containing porypherin b12 is actually used in our bodies. Many plants also use accessory pigments like xanthophyll, which has a very different structure.