The springcroc is not a Furahan but an Eponan animal. Parts of the vast Epona material have reappeared on the web, and the many life forms discussed there include the springcroc. You will find it right here. Regular followers of this blog will now that I have discussed it before (first here, and then here and afterwards here), and I will probably come back to it in the future (I was one of the people who used to work on it, so that's why).

The thing to remember about Eponan terrestrial life forms is that they left the sea fairly recently, so adaptations to a land-based existence have not yet reached optimal solutions yet. That holds for Eponan trees, whose stems have not yet evolved anything as suitable as wood, and it may also hold for the springcroc. Its general design is very nice: in essence a springcroc is just a large stomach enclosed by two half shells. It lies in waiting in some swamp, and when a suitable prey arrives in striking distance the springcroc catapults itself towards the prey using its own froglike leg. The prey is engulfed by the stomach and is slowly digested. Simple, but simple solutions work. 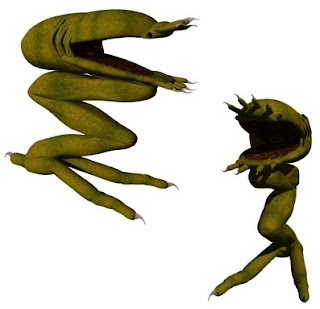 Click to enlarge; copyright Worldbuilders
This is the springcroc as shown on the Epona site. Steven Hanly, one of the people involved in the Epona project, produced many 3D Epona images at the time, many of which can be seen on his web page. For this purpose he had also built a 3D springcroc computer model. A few months ago he sent me his 'obj' file to have a look at. I was also trying out ZBrush, a 3D 'sculpting' program that is extremely well-suited to produce organic looking animal shapes. I imported the springcroc shape, and used it to try out some embellishments, as ZBrush allows you to push and pull at objects at will. As you will see this ability is the reason why the poor animal now has so many bumps on its head.

I also decided to 'bodybuild' its musculature somewhat. With just one leg it must be difficult for the springcroc to control the direction of its jump in a lateral direction. While a jump in the general direction of the prey can work for extremely slow prey animals, a jump with some more precision should help the springcroc to rise to the pinnacle of the food chain (or at least to stay in plaavce with more ease). The only way the springcroc can exert lateral control is by pushing harder or less hard on either of its two toes while jumping, so these are fairly wide apart. For similar reasons the joints between the segments of its leg were broadened: to provide more joint stability as well as a bit more control. 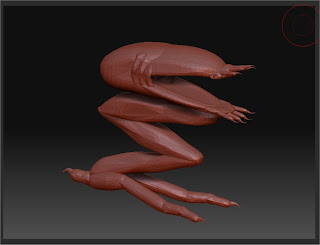 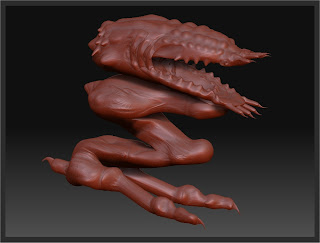 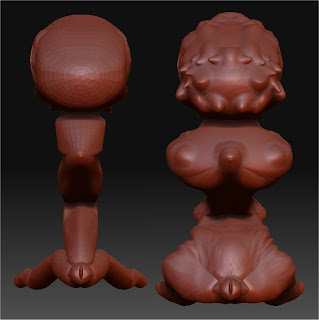 So here it is: a springcroc before and after embellishment in ZBrush. As said, the bumps serve mainly to make it look more interesting. 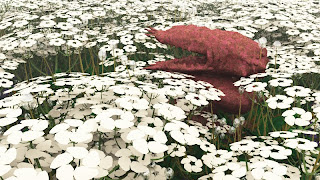 Click to enlarge
Having done that, I exported the model again, and after some trouble loaded it into Vue Infinite, where I embedded it in a meadow-like environment of Eponan plant (well, actually one plant was designed for Furaha, but these images are sketches, nothing more). The springcroc should really be coloured a bit more interestingly, but this is just a work in progress. The white leaves reminded me of springtime, so there you have it: a springcroc in springtime...
Posted by Sigmund Nastrazzurro at 12:24

I like the logic behind the musculature and what you have illustrated using ZBrush. I also agree that the coloration would probably evolve to better camouflage the creature. I don't recall these white plants on Epona but my memory is hardly a good measure. If this kind of meadow is a potential springcroc habitat, I would expect the coloration to be quite different. Definitely more speckling on the skin surface rather than a smoother overall tone.

The white plants only 'evolved' during email exchanges between Steven and me a few months ago, so they are definitely not part of the original Epona set. Then again, they do follow the pattern of having five branches.

As for colours, you are quite right. Zbrush has some 3D paint routines, but these failed to make it into Vue. I tried some greenish speckled schemes, but they worked so well as camouflage schemes that you couldn't really see the springcroc anymore. I will try another one, with proper colours, once my new computer is up and running.

The bumps actually make the springcroc look more...I don't know...real, giving it texture to some degree. The initial picture just looks too smooth skinned, without even the pits and bumps that cover the skin of hairless mammals (us) or lissamphibians.

Wow, found your blog this week and fell in love with him. When I have good texts as they are illuminating.

I am a philosopher and poet, and sometimes I get dreams of "how are other forms of life outside Earth?" I confess that, even with my bad English, I fell in love with this blog.

You have the greatest blog on the internet, keep up the good work!

I've always had issue with the springcroc and it's seemingly weak jumping leg. It's nice to see an updated version with a more plausible musculature. Now if I could just figure out where all of its guts are... :)

I don't know anything about epona, other than what is here and on the epona site, but i ran across it a few weeks ago. While the basic design is rather alien and interesting, the whole concept as described isn't very convincing to me.

1) description and image don't match.
* It's leg is supposed to be able to be "tucked neatly into a shallow groove on the underside", which looks clearly impossible.
* It's described being able to, "surge forward in the water" which seems implausible given it's thin toes
* Eyes are mentioned, and presumably needed catch anything, but i don't see them.

Maybe this is just a matter of communication issue.

The concept of this creature as the "top predator" also leads to a weird ecology. As described, anything the springcroc eats has to fit inside the tongue, inside the shell-mouth. Is that right? At the very least it has to fit in the rigid mouth cavity. So all a potential prey animal has to do to avoid predation is to grow too wide to fit in a springcroc mouth. Maybe that's what you want, but i thought it should be pointed out.

Luke: thank you too!

I think that I personally would have altered some aspects of the springcroc's anatomy too, but you should understand that the design is not mine (and as far as I know the original designer hasn't resurfaced yet). In fact, I felt a bit uncomfortable by altering it as much as I did, and I would not want to take that any further without input from its creator.

I do feel free to comment on its ecology and size of its mouth though. I agree that the springcroc could indeed only act as a top predator when the competition hasn't yet got its act together, and as long as the prey is fairly small (then again, it it ate half of all herbivore offspring, it might still claim that title).

But even after more agile predators have evolved, a (form of) springcroc could still be successful in its niche as a slow ambush predator, I think.

Perhaps such issues were in fact discussed when the springcroc was proposed when Epona was first populated. If so, members of the Epona team who know about such matters should feel free to add their comments.

I agree with everyone else aboutthe great improvements. In response to Evan's comment, perhaps it does most of it's digesting in its mouth. Or perhaps it's intestines are in it's leg, like a sea spider, though that would be hard with all the muscles. I like all the new bumps you've added, makes me imagine different species of springcroc with different shaped bumbs acting as camoflague for different environments; Forest spring crocs and grassland spring crocs, ect.

The beastie that the springcroc developed from is the "jumping clam", a fully aquatic creature (like most of the Eponan base forms). It did have a webbed foot, and could "surge" through the water to capture prey. The model that Gert used was a land-based form that evolved to fit niches on land, and it lost most of the webbing. The Springcrocs main creator is indeed Roger. The groove that the upper thigh fit into was due mainly to the shape of the shell, in order to be able to crouch down a bit more and hide a bit better. In the wild, the springcroc would also have all kinds of plants and stuff growing all over the shell as a kind of symbiotic camouflage.

As for where the guts are, there really aren't any. The shell acts as a gizzard of sorts. You can't see it very well, but there is a smallish, prehensile and toothed stomach at the back of the shell, that nibbles on whatever is trapped in the shell. The pulmonary and circulatory systems are distributed in the shell halves, which (if I remember correctly) results in a slight pumping motion of the shell. When the food has been digested, the waste products are spit out (so there is no anus per se). Like a hydra, the digestive tract isn't a tube, but a cul de sac.

Disclaimer: Since most of this stuff is based upon old memories, any mistakes/errors are due me and the amount of time it has been since I last read the notes in any detail.

As I mentioned to Gert when he showed me what he did to my model, I like everything he did to it, and he gave good reasons why he did so. He made it look so much better! So much so that I can't believe I thought it was good back when I made it :-)

"...there is a smallish, prehensile and toothed stomach at the back of the shell, that nibbles on whatever is trapped in the shell"