Furahan biology and one of its allied matters: origami. Yes, origami!

My series of rusp posts have created something I never expected: an origami rusp. For more on rusps, simply start at the previous post in this blog. Regular commenter Petr (Petr Stuchlý) has sculpted four models of Furahan animals in what for me is a novel medium: origami. He posted photos of one of them, the brontorusp, on DeviantArt under the title of Xenorigami, which I rather like. Petr was kind enough to send me all four models in a neat package, which I appreciate very much.

Let me show you the models. Here are all four of them along with a prototypical matchbox  for size. Let me close in on all of them.

First, of course, the origami model of the brontorusp (Brontocrambis brucus). I have never published a complete image of the brontorusp, so Petr could not know that the front and hind heads are not identical. If you take a look at the image of the origami brontorusp on his DeviantArt page, you will see that the front and hind heads are identical. Once we got to talking about that he has made some changes to the model, and now the hind head no longer has a rostrum (snout). Before you ask about two-headedness (the Janus effect), here is an explanation. The basic ancestral rusp design involves developed segments with eyes on each one. When the lineage increased in complexity, 'cephalisation' set in, so nerve clusters, eyes, whips etc., concentrated in one spot leaving the animal with a head... Actually, no!. That may be what happens usually, but in rusp evolution there was not just an increase in complexity, but cephalisation also involved a loss of some functions, such as visions in middle segments. That, probably coupled with a need for defence on both ends of the rusp, stopped the loss of vision there, so there are eyes there, with a fully functional whip capable of giving any predator a good wallop. There is also a circular secondary brain, the neurannulinus, communicating -we assume!- with the neurannulus in front. There is no hind mouth though, so no rostrum there, and rusps definitely have a front and a hind part.


Let's look at the details. I think that Petr caught the shape of the brontorusp's head very well. I have only a very vague idea of how you would go about to create such an intricate design from a square piece of paper of 50x50 cm. From his own comments ("hell on earth to fold!!! XD") it was not exactly the easiest thing to do. 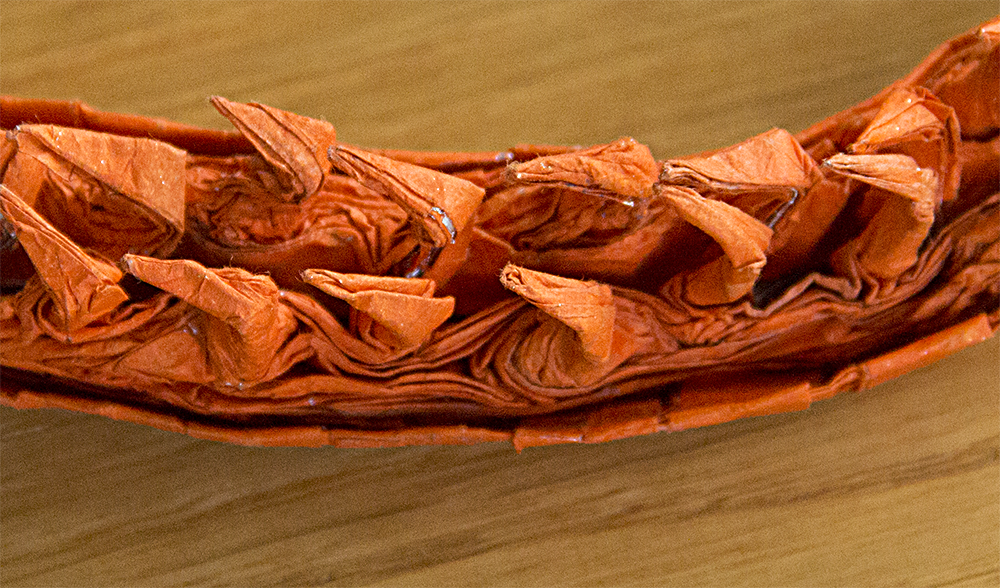 The many folds at the rusp's bottom are interesting. Petr explained a particular featre as the result of his folding technique, but regardless of the cause the design parallels my rusp design in a surprising way.  Rusps, as large animals, have vertically-orientated legs that swing forwards and backwards under the body, and not sideways, so there is a risk of them kicking one another. That problem was sidestepped (sorry for that one) by having the legs alternately offset to the centre or the side of the animal. The origami rusp has the same feature! 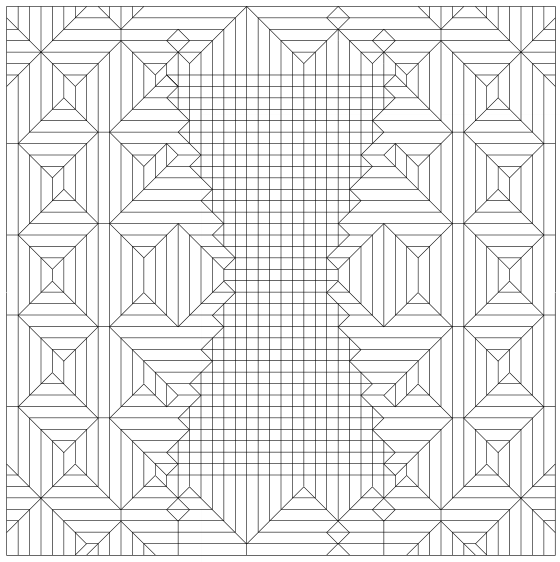 What you see here is the 'crease pattern' of the rusp laid out on a piece of paper. The 'CP' has lines indicating valleys and ridges, and helps the designer shape a flat piece of paper into a remarkably solid and three-dimensional sculpture. 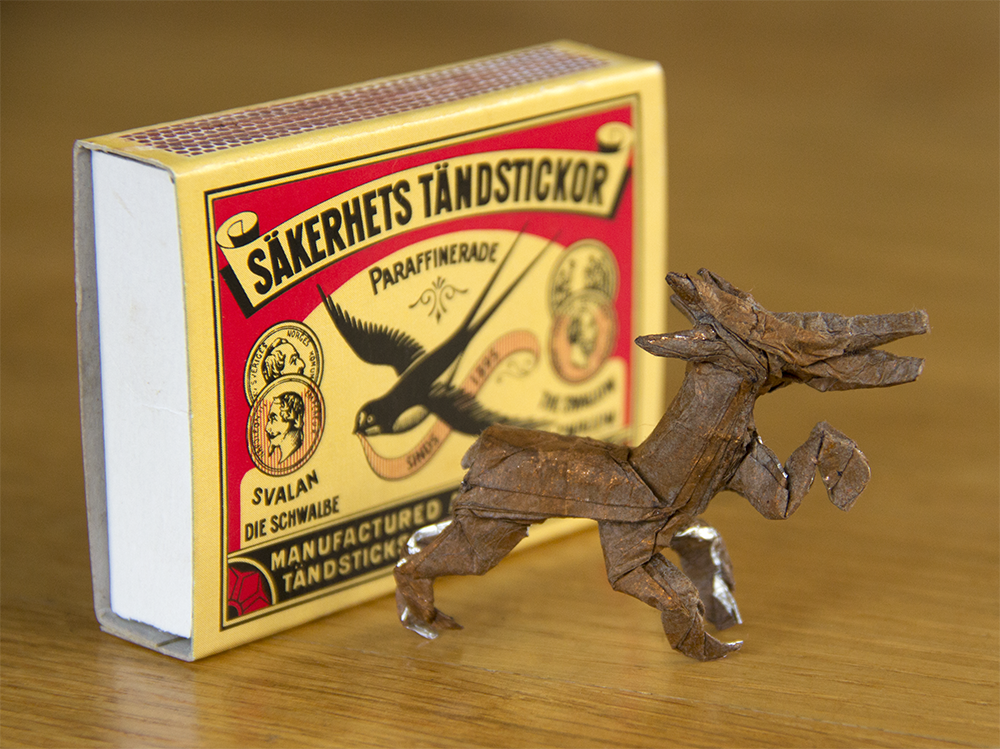 Petr has also made a hexapod neocarnicore, with its typical 'raptorial appendages'. The model captures the form well, which must be difficult as it is a very small model: he wanted to keep the models within a certain scale range. They are not fully in the same range, but I do not think I ever published enough data on exact rusp size for him or anyone else to judge the size accurately. Above is a new scale diagram for The Book, so you can see how large brontorusps are.

A marshwallow! It is complete with three horns, and even seems to have the continually irritated expression that humans project on the animal's cranial features... 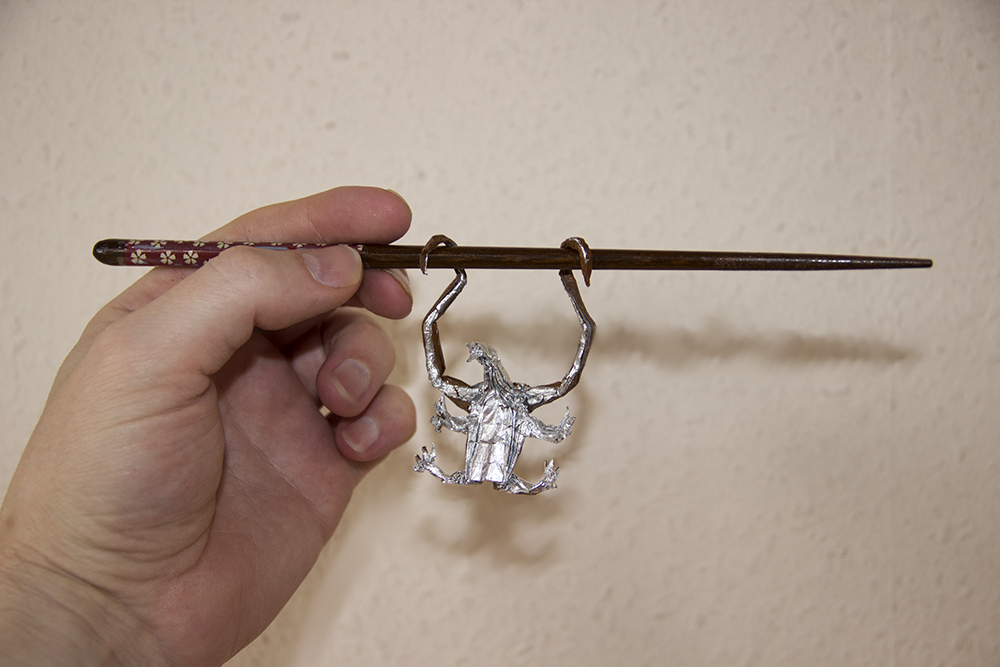 And finally, two sides of the marblebill, here suspended from a Japanese eating stick, to stay  in style. Origami paper can have one colour on one side and another on the other, and here that principle was obviously expanded by having a two-layered sheet of paper with metal foil on one side. Somehow Petr managed to have the dark paper end up on the dorsal side of the upper limbs and the metal side on the palmar side, doing justice to the pattern of the marblebill.

It is obvious that Petr is rather good at origami. If you wish to learn more about his art visit his Flickr page,  DeviantArt page or a page at an English origami site. If you like palaeontology, and the chances of that are high with a blog like this one, you should visit his page on origami versions of extinct animals.They're very good.
Posted by Sigmund Nastrazzurro at 23:11

Thank you for your enthusiasm and support.

Making these models was fun, you have photographed them splendidly, I could never manage to achieve such crisp shots with my equipment.

Let's hope the followers of this blog will like what they see :)

Let me just note that rusps are indeed much larger than I imagined them to be, if I stood face to face with one, I would definitely freeze in awe. :D

I wish you success with The Book, it is on my "to buy" list already.

The material you have published so far looks wonderful, so I believe it'll meet success! ;)

I really appreciate your comments,

Now that we mentioned rusps, I find a marked difference between them and the hexapods: The rusps have many more legs. That makes me wonder, how distinct are they from their hexapod relatives?
On Earth, we have Arthropods which vary greatly in the number of legs: Crabs have eight (ten when counting the claws), spiders have eight, most insects have six, and millipedes have the most, but the number of legs may vary between species.

The situation is different among higher organisms: birds, lizards, mammals and amphibians - All have four limbs. It seems that these have a brain too complicated to simply accommodate additional pairs of legs... or is there a different reason?

I would never thought this is possible with origami, great work!

Petr/Pete: my pleasure! By the way, all you have to do to NOT be swiped away by a rusp is not to be near it. Easy.

Christmas Snow: Interesting question: "How distinct are rusps from their hexapod relatives?" I do not see them as relatives, really. They are of course related to one another in the same way as all life on Earth is related, but that is about it. They are probably as closely or as distantly related as arthropods, molluscs and vertebrates are on Earth: very, very distantly.There seems to be a supposition behind your question, to the effect that the various major arthropod groups (e.g. spiders, crustacea, insects) are about as closely related as major vertebrate groups (amphibians, mammals, etc.). And yet the differences in body plan between arthropod groups include the number of limbs, whereas that is fixed in legged vertebrates.
My reasoning is the other way around: the differences between arthropod groups suggest that they are much further apart than the vertebrate groups are from one another.
In turn, this raises the question how you measure the distance of evolutionary relations. There is such a thing as 'evolutionary distance' based on DNA changes, but that does not take morphology into account. I had a quick look but could not find a ready answer. It's probably in the literature somewhere...

Do large rusps have significant pneumaticity?

As an amateur paper-folder, i must say that is *very* impressive.

Hey Gert-meister, you think you can do a post centered on your thoughts on any potential biology of these video games: Skyrim and Borderlands(2)? I know you are not a gamer, but at least you can utilize each game's wiki to help you out some more.

So rusps have a head at each end, though only one has a mouth? Wouldn't having two heads with two brains be a major handicap? Think the rare mutant di-cephalic snakes, whose heads don't get along and inevitably fail tu survive in the wild. Assuming this is an issue among rusps you'd think one-brained rusps would dominate very quickly...

gleep: The snakes are an obvious pathological mishap, and therefore not suitable for comparison with animals after a long evolutionary adaptation. A better comparison might be cephalopods: the nervous system of each arm is to some extent autonomous, and yet the animal as a whole works.