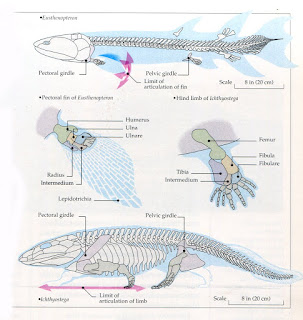 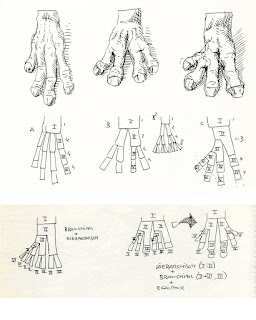 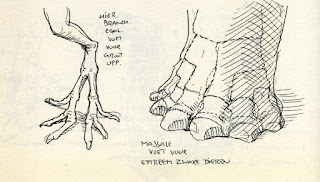 Posted by Sigmund Nastrazzurro at 16:19

Nice diagrams. I'm glad you finally got around to talking about feet.

Fentil's herbivores have the 'B' branching pattern. I think you commented on the TailFeeder's stout, Barlowe-esque feet and I've definitely taken this lesson to heart. So thank you.

It's an interesting set-up to make wings out of.

Hello Dan, Thanks. Actually I wanted to keep 'feet' for a lengthier post, but once started I could not help myself.

You are absolutely right about the design for wings. For larger Furahan avians you cannot guess they underlying anatomy though, seeing as how they are covered in a sort of bubble-wrap tissue.

I wouldn't mind seeing a "Devonian II" or something similar. When I look at those digit bifurcations, I can't help but wonder just how one would go about calculating the strength limits and weight distribution on all those toes. Would it be anything like the calculations for the megamonster legs or the walking posts? Or are there other factors I'm unaware of?

You mention in the original post that the extremely thin example-- with the foot split high up the middle-- would never be seen on Furaha. Why is that? Is the gravity too high? Are there any condtions in which that went further? Also, is there any plausible scenario in which the bifurcation could go even further, in a shape much like the prolemuris from Avatar?

I agree that wings based on any one of these systems (or anything similar) would be pretty wild. In fact, I wonder if that could lead to allula-like structures (with novel applications) or even shapes similar to the notches at the wing tips of some birds, which apparently helps generate lift.

Evan: I may yet write another post on toes and feet. I would like to back that up with more solid science, but I have found very little material on the subject. I will keep digging; someone must have wondered about toes before...

I wrote that the leg with the high split would not be used of Furaha because of how high the first division is, not for gravity or anything similar. My feeling at present -without calculations to back them up- are that a high split will result in a certain width of ground being covered by the toes at the expense of a certain mass of bone. With a low split you can probably get the same spread with less mass.
The reasoning behind that is the same as for the legs in the megamonsters post: splitting forces along multiple bones requires more bone mass than if the forces are taken up by fewer bones.

Mind you, if so, than the branching toe design actually could be superior than Earth's parallel toes!

I think _Gaining Ground_ by Dr. Clack might help...though I confess I skimmed through the relevant text.