Some books cannot be classified into a category with any ease; 'Salsa invertebraxa' is definitely such a book. It deals with fictional animals, which criterion by itself reduces the number of books in the putative category enormously. It is not told in a pseudoscientific manner as if the life forms in it actually exist. Dougal Dixon's books are pseudodocumentary in nature, and so is Barlowe's 'Expedition'. If Snaiad, Nereus or Furaha ever make it into book form, they will also fit in the same pseudofactual category. 'Salsa' does none of that; its focus is to tell a story of life through images. It deals with fictional insects functioning as characters with heart and wit, and does this admittedly surprising job brilliantly, I think. I first learned about it through the magazine ImagineFX, and then soon found it on the Behance site. I was intrigued but puzzled by the wonderful but complex images. I found reviews, but the reviewers seemed at a loss to describe what to make of the book. The author, Mozchops, has a page on DeviantArt as well as his own site. If you are interested you should visit all these sites, as they show a fairly large number of the digital paintings Mozchops produced for the book (there is a still larger number of unpublished paintings in the book though. When I found the site of the publisher, Pecksniff Press, I needed but a day or so to decide that I just had to have the book. It was promptly delivered a few days later, but meanwhile I had already contacted Mozchops (Paul Phippen), who was kind enough to explain one or two things about his work. So what is 'Salsa invertebraxa'? You could describe it as a 'graphic novel' telling the story of two insects, comrades from different species travelling through a forest. They are pranksters, stealing eggs from spiders and centipedes. They adorn themselves with the moulted exoskeleton from a cicada-like insect. Decked out in such fashion, they capture colourful caterpillars, suspend them from threads and ride them through the air as if they themselves are knights in armour sitting on war horses. While true, this description might cause the book to come across as silly or even childish. It is neither. It is in fact an extremely complex work that does not give away its secrets lightly. Working out the story needs attention to detail, and there is more to the story than just the above synopsis. The images themselves need careful analysis, because they are full of details and because the artist makes no concessions nor steps down to clarify what it is about. The reader has to rise to the challenge, one I personally enjoyed. There are bits of sparse text, but the words are there to evoke an atmosphere, certainly not as a legend to explain the images. I found myself studying the book several times, and only then did the story start to become clear in my mind. If you like your fantasy biology straight, with little arrows pointing to biological details, you may not like this book. But you would risk missing the incredibly capable artwork. There are certainly enough odd insect shapes in there to satisfy those who like alien animals. Or perhaps their shapes are the result of an alternate evolution on Earth; who knows? I do not think everything in this biology can work. For one thing, I very much doubt that there is space in an insect's head for the neural machinery needed to produce an intelligent prankster, but this is one of those instances where such criticisms are completely beside the point. Ignore it. On rereading the above text, I still doubt that it gives you a full idea what the book is about; you will probably have to read it yourself. I will show a number of images I chose that Mozchops was kind enough to send me in a high-resolution form. 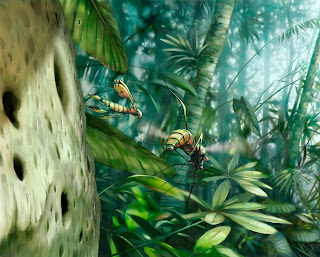 Click to enlarge; copyright Mozchops 2011
Here is an early scene of the two protagonists flying about; the one on the left has clublike extremities while the other is mosquito-like. Just note the shimmer of the wings of the 'mosquito'; it takes skill and belief in your skills to dare paint motion-blurred wings like that, with so little indication of what you see.

Click to enlarge; copyright Mozchops 2011
This image is out on the web already, I think. The two heroes encounter an army of termites, armed to the teeth. I include it so you will get a feeling for how the text adds to the image. 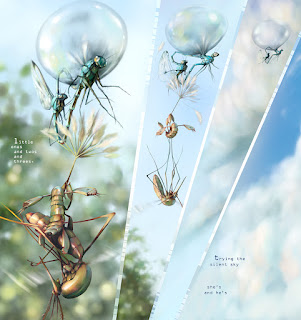 Click to enlarge; copyright Mozchops 2011
Obviously, I could not resist including this one. Regular readers may remember that I did some calculations regarding 'ballonts' some time ago. I had to conclude, to my considerable irritation and disappointment, that my idea of filling Furahan skies with ballooning plankton was not going to work: small ballonts do not work. Luckily, Mozchops had not read that and had designed animals like that. He provided a twist to the idea that I like very much: you are probably all aware of the peculiar mating flight of some dragonflies: the male clasps the female by the neck using claspers on his abdomen. Together the two then fly around to deposit eggs in suitable places. Well, in Mozchops' view the male has a balloon instead of wings, and so the two can float around serenely. Aren't they wonderful? It makes me wish to ignore my own reasoning that small ballonts cannot work... 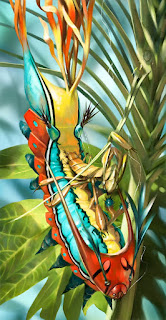 Click to enlarge; copyright Mozchops 2011
This is one you may have to look at for a while. One of the protagonists, the one with the clubby legs, is riding a caterpillar, as colourful as the saddle cloth of any mediaeval war horse with pennants trailing behind it. 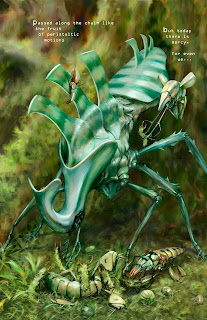 Click to enlarge; copyright Mozchops 2011
At the end of the book the two are met by a host of insects working together as a troupe, the purpose of which is our guess. I wish to show it to you so you can see the inventiveness of the insect shapes. Note the one flying on the right, with its near-mechanical shape and its protruding tongs. The multi-species insect armada contains some of the most wonderful insect shapes in the book.

Click to enlarge; copyright Mozchops 2011
Here, a host of insects, from small to majestic, takes to the skies in an exodus the reasons of which we are not told. Mozchops was kind enough to send me an early sketch of this painting, which is an exclusive for this blog. I would like to draw your attention to one insect at the left, the one with twin booms sticking out backwards. I love its shape, with its twin booms evoking the shape of aircraft such as the P38-Lightning. Note that the entire painting is filled with many such inventions. Other people would probably be content to paint just one such design on one painting; here, we are spoilt for choice. All in all, this may be one of the oddest books I have, but it certainly is also among the ones I like best. It certainly deserves more attention, and I hope that this post helps bring that about.
Posted by Sigmund Nastrazzurro at 20:41

It is an interesting collection of invertabrates. *makes a note to buy this book*...thank you for reccommending it.

Some of these insects make more sense than real insects.

Thank you for the review and pictures! =)

Rodlox: You are right in that real insects can look extremely bizarre. Here is an example: http://whyevolutionistrue.wordpress.com/2010/11/26/the-surreal-treehoppers/

Heh, I watch Mozchops on DevART- his visions are quite unique. I agree with rodlox- very often real insects are far stranger than fictional creations. However inventive an artist is, nature always comes up with something weirder. (:

I have a question regarding ariel plankton and small ballonts- what about those little baby spiders that "balloon" beneath a string of spider silk in the wind? This is not actual ballooning, but rather mechanical kiting, I know- but small "kites" and "parachutes" like this are a way that you could have flying plankton even though small ballonts will not work. Any thoughts?

This is true. At the time of writing I considered adding something about spiders moving though the air using a silk thread. That definitely works, and people have studied the biomechanics of this system in some detail. But to develop it into aerial plankton suggests that animals should perhaps most of their lies in the air, in turn requiring chances to come upon food, mates, etc. I do not yet see how you would get plants going in the air: there is water, but where are the nutrients?