Archival scenes III: "Here I am, on the shores of Lake L'Ambique..."

Unfortunately, real life, as it is called, at times requires considerable energy. Energy is a limited commodity and seems to consume creativity before it starts devouring other resources. In fact, I have toyed with the idea of closing this blog for a few months, with a note saying 'Away until I'm back' or something of equal intelligence.

But not yet. There is life here, and some unheard-of beasties may be encountered in the niches of the archival biotopes. I do not think I have ever shown much about humans on Furaha, which has its roots in my hesitation to even allow them on the planet. I thought they would wreck the place within several generations. After all, it's what they do. However, I decided that the project needed human interest, so I did introduce this alien species on my pristine planet. Once I got over my initial distrust of them, I did enjoy having humans around for various reasons: they could act as scale indicators, or they could be the actors in side stories about scientists arguing about animals' names and other typically human silliness.

But I never did a painting of humans on Furaha, and I do not think I ever will. There is a very rough sketch in the first ever post of this blog, and today I will present you with another sketch, only slightly less rough. 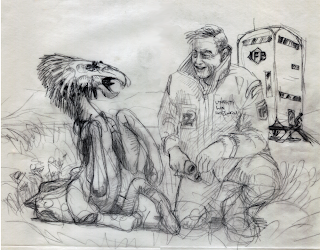 Click to enlarge; copyright Gert van Dijk
This is a pencil sketch on tracing paper, which explains why the contrast isn't that good. It also wasn't developed beyond this first approach (please do not look at the human's legs!).

As you can see, a Furahan citizen/scientist is squatting down near to a Furahan predator, a 'prober', to have a closer look at it. There is some kind of vehicle behind him; I tried to get away from the type of vehicle people might expect, and so designed a boring rectangle you could just dump anywhere as a temporary blot on the landscape. But this is about humans: apparently our hero is not afraid of the prober, which is not in line with some of the things I wrote over time. One statement held that, while humans may not be palatable to Furahan predators, the predators have not eaten enough humans yet to have learned this basic fact, so nothing keeps them from trying.

Let's assume that this person knows what he is doing. I certainly assumed so, as I modelled him on David Attenborough. The sketch probably never did resemble Mr Attenborough very much, but it did a bit more when I made it than it does now. I must hasten to say that I am a great admirer of Mr Attenborough, so this sketch was not at all meant to ridicule him. Quite the opposite, in fact. I think I was trying to imagine the very best of all possible documentaries on Furahan life. It would be one of those excellent BBC nature documentaries hosted by Attenborough. Imagine Attenborough on Furaha, with him talking straight into the camera. You will have to imagine the proper accent: "Well, here we are, on the shores of Lake L'Ambique, where we just happened to come upon this extraordinary animal..."
Posted by Sigmund Nastrazzurro at 22:29

I've always liked this picture, but until now I didn't realize it depicted a hexapod laying on its side. I thought it was breaking out of an egg, with a naturalist there witnessing its birth.

It's not at all surprising that interplanetary naturalists would illustrate animals and plants rather than themselves, that's what their on alien planets for (besides, animals and planets are way more interesting than people, especially if they are extraterrestrial). Keep up the good work.

New question unrelated to the post. I've read another post pf yours about what number of legs a mega-monster should have. I recall that they final verdict was two legs and pointed out theropod dinosaurs as an example. Relating to this, what, in your opinion, would be the maximum height for a bipedal Earth organism that walks fully up right(think Bigfoot or early hominids). I know there as some physical limitations to tall heights such as joint problems, but if those problems were solved through natural selection, I would guess 10-13 feet, though I would hope for at least 15 or 16 (I think dinosaurs and some flightless birds pulled of taller heights due to their body design or something).

I enjoyed reading the background to that picture. and I've always seen him as a rather Attenboroughesque individual.

Christian C. - flightless birds aren't really upright bipeds (unless they're penguins, or you're only measuring to the hip - which also applies to predatory dinosaurs)

Spugpow: sorry about that; the previous scan wasn't very good.

Christian: Concerning the best number of legs for a mega-monster, please read the comments section as well. I wrote that text and mentioned the assumptions of my model, but did not stress them. The assumption is that that the amount of bone needed to withstand the stress of standing was the only criterion to keep in mind. In real life, and certainly in biology, there are always other considerations, such as a need to deal with injury. Break one leg out of two and you my die, whereas one out of eight is no big deal.
With that out of the way, how large could a biped be? If you mean fully upright, are you talking about legs (pillar-like vs zigzag) or the body (with the back horizontal or vertical)? The answers probably lies in manipulating the various needs. Columnar legs save weight, so you can have a bigger animal by saving leg weight, but columnar legs are less agile, so the risk of falling increases.

What you can do is folow Anonymous'lead; take the hind legs of the biggest theropod: we know those work, and they are agile. Instead of a long horizontal body with a long tail, tilt the body vertically and cut off the tail, leaving enough body forwards and backwards to give the leg muscles something to attach to (which probably calls for a redesign of the leg, but not much). Add a lightweight head and forget the arms to save weight, and you should have saved enough weight to make a very impressive biped. Just my guess though...

Hm: I thought someone would have asked for the meaning of the logo on "Attenborough's" shirt: 'Utafiti wa wazungu'...

Ah, David Attenborough: the quintessential expository naturalist, IMO. They should preserve his genetic code and send a clone to every habitable planet we find.

What does that saying on his jacket mean?

As far as a fully upright megamonster is concerned, it's always a tricky balance (pun intended). Walking on two legs involves quite a bit of subtle muscle control, and the bigger/heavier it gets the more muscle power is needed to keep all that weight upright. I don't even know where to start calculating where the limits are between maximum size and efficient motor control. Perhaps we can persuade Sigmund to make another blog post on the subject before he decides to be 'Away until he's back.' :)

Thanks for taking the bait about the words on the uniform. ;-)

The text says 'Utafiti wa wazungu', and it's a private joke. In East African nature parks you will see vehicles belonging to research societies, with their names in Swahili. One could be 'utafiti wa simba' (lion research), or 'utafiti wa fisi' (hyena research). Now the plural of white man is 'wazungu', so it means 'research into white people'. Mind you, the word is not used in a racist sense; it is neutral, like 'European'. Anyway, when tourist cars meet the drivers will exchange news in Swahili. Our driver used to say we were doing research (utafiti) and of course the other would ask what the research was about. 'Utafiti wa wazungu', our driver replied, which the other drivers always thought very funny.

As for the two-legged monster, I do not think I can work out what a credible balance between stability and control would be. There are too many unknowns, I think. Besides, I am playing with the idea of a proper discussion of why a sightless world is very unlikely -before a blogging vacation-, or is that too easy a subject?

Thanks for finding the time to give your input on my question even though it was off topic from the blog post. Maybe it would help if I describe what I'm trying to work on. If any of you are familiar with the book Man After Man, you would know that one of the creatures depicted in it are large, yeti-like hominids called tundra dwellers. I believe the idea behind their larger size is that arctic animals tend to be larger in order to conserve heat. I was also inspired by claims of giant human remains ranging from 7-36 feet in height (though I don't take them seriously). The creature I'm creating for my project is based off of the tundra dwellers. They start out at ten feet in height but grow to 13 (or 15 if possible) feet in response to the tundra getting colder. They don't, however, always walk upright. When needing to move fast or climb over more rugged terrain, they move on all fours in a manner similar to that of gorillas or orangutans. That should help with the falling issue (though you would think that thick layers of fur and blubber would cushion the impact). please share your input if you have the time.

In the first place, Christian, it seems that would make your own "tundra giant" something of a facultative quadruped, taking some of the strain off of size increase. Secondly, I highly doubt that 10-13 feet tall will strain the size limits either. A close analogue would be brown bears and polar bears. They can grow to around that size, so looking at them for inspiration may help.

Sigmund, while I find it mind boggling myself that people insist on a sightless world being plausible, I think it would be good to have someone with your scientific expertise and reputation lay out a cogent argument.

re a "sightless world"...I consider sight to be like sonar: it confers massive advantages upon its' bearers (harder to bluff a sonar - a dolphin (for example) can read your innards), and have an easier time finding food that even sight-bearing animals can't find.

the ability to sense electric fields is similarly adventageous...yet the world hasn't been taken over by sharks and platypi.

*also*, are we talking "sight" as in telling light from shadows? that'll be more prevelent than the "sight" which is forming complex images in the brain.

That sketch is actually quite a likeness of SIR David Attenborough. I do happen to be British.