While it might be nice to design fossils of life forms that never existed, that is not what this post is about. The 'fossil' part of the title concerns bits of the Furaha website that once existed but later vanished in an upheaval of sudden changes, and slowly got forgotten afterwards. This happened to the GalFloat advertisements and to several life forms. Some were and are perfectly viable, and are taken off the site simply to keep enough unpublished data for the eventual book. But some disappeared because they were no longer good enough, and some of these will be resurrected here. That happened to 'amphorae' and 'colonies', life forms in clear seas. They first appeared on the Furahan stage somewhere around 1997.

The life forms in questions were shown as animations, and as such they were subject to changes in computer hardware. They were originally written in QBasic, that used to come bundled with Windows. The Basic programs produced length text files defining large numbers of triangles as coordinates in space, and these text files were in turn read by a free program called 'Persistence of Vision' (POV), a ray-tracer. I used that to animate one image at a time, and a day or so later I had a long list of images numbered sequentially. These were then used to form an animation in the form of a .gif file. There were major hurdles in this laborious process: the first was that QBasic programs quickly looked daunting, limiting the complexity of the scenes. The major hurdle was of course the internet: the animations had to be short and small at only 75x125 pixels. Even then loading them took quite a while.

Time passed, the internet sped up, and at one point in time I considered the animations too small and too tiny to keep on the site. Then I found out that I had not kept all original Basic files. Extinction.

More time passed, and I stumbled on a CD with the missing programs. Still not all of them, but together the fossils allowed a fairly good look at these erstwhile life forms. So I found a new incarnation of QBasic, found that POV still existed, and went to work. The animations are bigger and include more complex scenes, but essentially they show the same things their ancestors did. 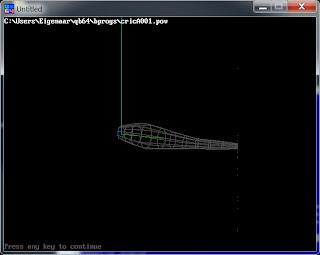 An amphora as shown in QBasic. Mind you, you have
to program things such as a perspective
transformation yourself in Basic! Click to enlarge.

Copyright Gert van Dijk
Here is one: a scene showing amphorae. At the time, I had not stipulated why they moved the way they did, but a reader came up with a suggestion: they did so to avoid amphorivores. By the way, that reader had at the time chosen the name Nemo, but had not settled on 'Ramjet' yet). The amphorae used to sway a bit with the current; that part seems to have been lost for eternity.

Copyright Gert van Dijk
And another one: a colony thingy. I remember that all the globes you see here are part of one and the same organism, but do not remember what the parts were for. They were probably just there to make it look interesting. 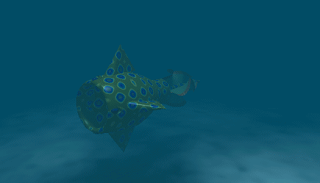 Click to enlarge; copyright Gert van Dijk
The image above was supposed to be animated as well; it is of course a cloakfish. Now cloakfish did not go extinct on my site, but are in fact thriving. The corresponding programs were about the only ones that remained to be resurrected when the others all went extinct. Why is the image above not animated? Because it was saved as a .gif file, and this blogger program seems to dislike that. Computer progress: three steps forward, one backwards and one sideways.

The reason for such a laborious production process was that it was the only one I could think of that would allow me to show the type of shape changes I wanted to have. I still do not think that there is a readily available 3D-program that would allow me to produce shapes such as the cloakfish tail with some ease. The downside of course is that I could not add a suitable-looking landscape. As you can see, the bottom of the sea in these animations is completely flat. It would be nice to make use of the features that a modern 3D programs such as Vue Infinite provides. If I could just find a way to reliably control the position of an imported object, I would be ready for the next evolutionary era. That's one of the reasons there are as yet only schematic animations of flying tetropters, instead of nicely rendered ones. Meanwhile, the Furahan fossils shown here will probably remain extinct for the time being. 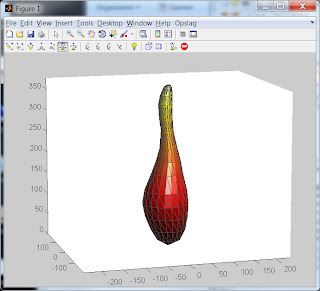 An amphora as a 'patch' in Matlab. The user
provides the 3D-coordinates, and the display
is dealt with by the program. Progress!
Still, I could not resist porting the amphora shape definition routines to Matlab, which was not difficult (learning a language takes time, using it does not). I then used an old routine to translate Matlab's 'patch' into a common 3D format (obj), and then I imported a few amphorae into a Vue seascape to show what the result might be like. Here it is, at the end of a post, waiting for life to arrive. 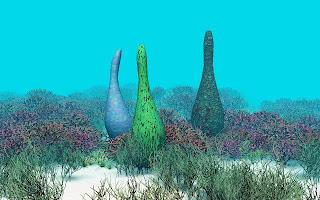 I was wondering, do you need any extensive knowledge of programming code to do all those animations?

No really, SingYu.
Anyway, most programming languages are all the same: they are about conditions (IF ..THEN .. ELSE) and repeated instructions (FOR / REPEAT), that's about it. To program things like cloakfish tails mostly requires goniometry and the ability to visualise what you want.

When you said amphorae though, I had almost thought you meant something like an archaeocyathid.