A future book on future evolution from France 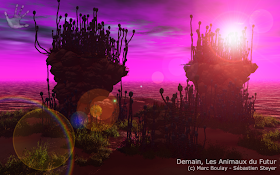 Click to enlarge; copyright M Boulay / JS Steyer
Yes, there will be a new book on speculative evolution, a real proper book, that you can actually hold in your hands. It will describe life on Earth 10 million years in the future, or well after man. Future evolution on Earth is a branch of speculative biology I have hardly discussed in this blog, but I thought I would make an exception for this project. Do not run to the bookstore just yet, as the book will probably be published in the second half of 2012. This means you have about a year to brush up on your French, because that is the language it will appear in.

It will be entitled 'Demain: les animaux du futur' ('Tomorrow: animals of the future'), and will be published by 'Éditions Belin'. The authors, Marc Boulay and Sébastien Steyer, told me that they are currently working on the second of what will be five chapters. Marc is a digital sculptor and Z-Brush expert, who has an extensive knowledge of animal sculpture and whose work has featured on this blog before. Does anyone remember me posting on an exposition in Brussels where future animals were shown, posted in February 2009? Well, Marc proved to have had a hand in their design, as I later found out and discussed here, here and here. Sébastien is a palaeontologist from Paris, who does not limit himself to going on fossil-hunting expeditions in Africa and writing scientific papers, but took the time to write a -very readable!- book on 'Earth before the dinosaurs'. If you like that subject, you might wish to take a look the French or Dutch versions; an English version is in the works. Together with Pierre Godlewski they have formed a firm, Cossima productions, to produce not just the book but other projects as well, probably including a television documentary as well as a book. The idea for the project began in 1999 and is completely independent of 'The Future is Wild'.

So what will be in the 'Demain' book? Obviously, we do not know yet, but you can get some glimpses at the site of Marc Boulay and of Cossima Productions. Perhaps the animals that were once shown on their sites will appear in the book. As these sites have been shut down, only some hints remain here and there, including on my own blog. 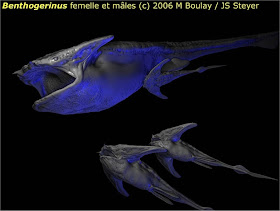 Click to enlarge; copyright M Boulay / JS Steyer
I really liked Benthogyrinus. The accompanying text says that it about the only surviving amphibian, a descendant of the frog species Xenopus. It has developed glands to expel salt and now lives in the seas. It reproduces in its larval stage and exhibits profound sexual dimorphism, i.e., males are much smaller and are shaped differently than females. For more images on this animal please read the original post.

Above is a demo reel of Diatrymimum boiseï, obtained from the links above. It is a large predatory bird, that has not just lost the power of flight but has lost its wings altogether, bones and all. It evolved from a parrot (Psittacus). As you can see the authors did their homework: whereas most people would limit their skeletal studies to some sketches, in this instance the skeleton has been worked out in full 3D detail. From then on the video shows how the body is shaped, and after that there are some colour studies. The background, with iits light to dark gray gradient, is typical for ZBrush. As a whole the demo shows what can be done with ZBrush (if you are a very accomplished 3D artist, that is!). What struck me is that the femur (the thighbone) is not horizontal as in ostriches but is oriented much more vertically, making the limb much more reminescent of that of a predatory dinosaur such as Tyrannosaurus. Such dinosaurs can afford to have their limb in this position because their tails balance the weight of the front part of the body, meaning that their centre of gravity is near the hip joints, and as long as the feet are directly underneath the centre of gravity, the animal won't keel over. Ostriches do not have heavy tails, meaning their centre of gravity is well in front of the hip joints. In order not to fall the feet still have to be underneath the centre of gravity, and the ostrich does that by having its thighs in a more horizontal position than Diatrymimus. I think Diatrymimus gets away with this by having a short and rather small body.

And this demo reel shows more of Marc's ZBrush work. There are ants, Burgess shale animals as well as dinosaurs and other Mesozoic animals, but about 40 seconds after the start there are glimpses of animals that may well be future animals, but whether they are part of the project described above, I do not know. Perhaps the authors will let us know. At any rate I will keep you informed when the book comes out, hopefully a year from now.

Marc sent me an email that he was happy with the post and added a file of a much better quality video. I agree that the videos I had shown you were not very good. The problem was not the source material, which was excellent, but in getting that quality here on the blog. The Google blogger program alters videos and shrinks them to fit one and the same size. Unfortunately, I cannot therefore replace the videos above with better ones. But what I can do, and should have done, is to point out where you can find better quality ones.

Both videos can be found on Youtube: here is the Diatrymimus one, and here is the 2010 demo reel.

Marc also added some other images for you to look at:

Click to enlarge; copyright M Boulay / JS Steyer
This is D. boiseï again, this time with lots of details of the head. I suppose that readers will have noted the development of teeth-like structures, lost by its bird ancestors a long time ago? The two commenters so far drew attention to the lack of feathers. I can understand how feathers might be lost on the head for predators: many vultures have unfeathered heads. But there is as yet no explanation for the total loss of feathers elsewhere on the body. We will either have to wait for the book, or perhaps Marc or Sébastien will take the bait and write a comment... 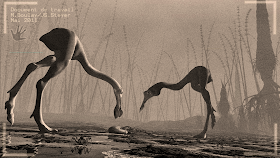 Click to enlarge; copyright M Boulay / JS Steyer
And a new species as well! It is called 'Spatamagnalis ruber'. If memory serves me right, a 'spata' is a short or broad sword, and ruber is definitely 'red'. Apparently, there are more flightless birds in this future. And featherless too... is it the climate?
Sigmund Nastrazzurro at 13:47
Share

Please leave a message if you find any of this of interest.